Boycott! Return to the bosom of the nation! For an Unchained Constituent Assembly! 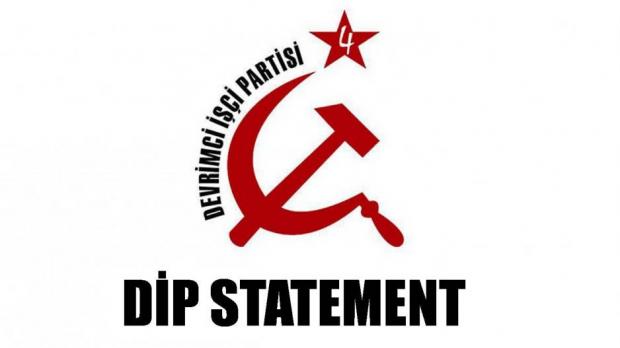 This is English translation of the statement of the Revolutionary Workers Party (DIP), amply adapted for the international reader and slightly abbreviated, on the decision of the Supreme Electoral Board (YSK) of the country for a rerun of the elections for the Istanbul Mayor.

The repeal of the elections for the Mayor of Istanbul Metropolitan Municipality by the Supreme Electoral Board (YSK in its Turkish acronym) upon the request of the AKP and the MHP [respectively the party of Erdoğan and the traditional fascist party of Turkey which has been an Erdoğan ally lately] is the latest and most striking instance of the chaining of the people’s will by the despotic regime of Erdoğan. The decision made by the YSK is a breach of electoral law, as well as of its own jurisprudence and even of the precedents that it set itself for the 31st March local elections.

However, there is no reason to imagine that the decision was made on a legal basis. This is the YSK, on which sat the very same judges, which changed the rules of the game in the middle of the referendum on the despotic “presidential” system devised by the AKP. When their duty was extended one year right before the local elections of 31st March this year, in blatant violation of the constitution, the entire reliability of the elections was destroyed (the constitution prohibits expressly a decision by the government or an act of parliament that may influence the results of the election within a year of the elections). This was indeed one of the major reasons why DIP boycotted the local elections.

And not only that. The series of elections held from 2015 on were all shady. The AKP lost the June elections in 2015, as well as its majority in parliament. The repeat elections of November the same year were organised under the shadow of bombs exploded by the ISIS (Islamic State killed more than 100 people in Ankara on 10th October 2015, a fortnight before the elections) in an atmosphere where only the AKP was able to carry out any propaganda in the pre-electoral period. Later, the referendum that introduced the presidential system long coveted by Erdoğan in April 2017, carried under the state of emergency declared by Erdoğan after the failed coup of 2016, was further marred by the change of the rules in the middle of the game, as already mentioned. And the 2018 presidential elections were carried out under the shadow of the chief of staff downing in a helicopter onto the garden of a would-be rival of Erdoğan (former president of the republic, Abdullah Gül, himself an AKP stalwart now playing the good cop), dissuading him from running. The opposition parties loyal to the political order were responsible for keeping their mouths closed every time the AKP won elections on the basis of such illegitimate methods. The DIP finally opted, for the local elections this year, for a boycott, trying to mobilise the working class and the toiling masses on the basis of politics independent of the capitalist class, of imperialism and of Erdoğan’s despotism.

The repeal and rerun of the elections for Istanbul Metropolitan Mayor has shown how correct that political stance was. The elected mayor of Istanbul, Ekrem Imamoğlu from the CHP (Republican People’s Party), the major opposition party once considered left of centre, constantly reiterated for weeks that the YSK was wholly reliable! Here we are face to face with that respectable institution!

The elections stifled under a blockade

There was a constant build-up toward this final conclusion. The environment was one of one-sided propaganda before the elections. This was even more strongly felt in the Kurdish regions of the country. Immediately after the results were known, the YSK denied some of the rightful winners from the HDP, the Kurdish dominated party, in provinces such as Diyarbakır, Van and Mardin, their right to become mayors on the pretext that they had been expelled from public service under the state of emergency that was declared after the failed coup, a notoriously anti-democratic measure that has cost tens of thousands their jobs through decree-laws without the slightest due procedure. What is even more ironic is the fact that the YSK itself had put the seal of approval on the candidacy of these very people, knowing full well their situation. The threat Erdoğan had constantly made before the elections to the effect that those mayors elected on the list of the HDP would be removed in favour of administrators appointed by the Ministry of the Interior was thus realised from hour zero through the services of a supposedly neutral judicial body that is the YSK. Only this time the administrators are the AKP candidates who ostensibly lost the election!

Later the elections were brought under a total blockade by the forces of the state, the police and the public prosecutors. Operations were organised to criminalise people for having served on boards that oversee polling stations on election day. By law, it is only the YSK that is authorised to pass judgments on election procedures. The police and public prosecutors cannot, without explicit decisions by the YSK, meddle into this domain. This is a blatant violation of the principle of equality of arms for government parties and those in opposition, as the latter have no say in the actions of the police for instance.

The reason cited for the repeal of the Istanbul elections is that whereas by law only public employees can serve on polling station boards, there were many cases where bank employees etc. were on these boards. But it was the district electoral boards that function under the authority of the YSK (reminder: acronym for Supreme Electoral Board) that drew up the lists for polling station boards. Thus whatever happened was under the responsibility of the YSK itself. And the lists had become definitive one month before the elections, i.e. it was no longer possible to appeal against them! So it is on the basis of an entirely bogus and unlawful reason that the YSK has repealed the Istanbul elections. If anything, it has held the electorate responsible for its own mistakes! To add insult to injury, it is this self-same YSK, with the very same judges sitting on it, which had changed the rules of the game in the midst of the electoral process during the referendum with the pretext that mistakes made by the electoral authorities should not get in the way of the choices made by the electorate. Such unmitigated hypocrisy!

The YSK decided under threat

The YSK was threatened right before its decision by the top ruler of the state, the president of the republic and the strongman of the entire system established recently, Recep Tayyip Erdoğan. He clearly said that for the YSK to be absolved of all suspicion, it must repeal the Istanbul elections. One of the mainstays of Turkish law is that the executive cannot, under any circumstances, meddle into the functioning of the judiciary. Erdoğan being the top of the executive, this threat has made a caricature of that fundamental principle.

KIlıçdaroğlu and İmamoğlu: You have contributed to this result, too

The very first deed of the winner of the race on behalf of the CHP, Ekrem İmamoğlu, when he was named candidate had been to visit Erdoğan and to promise that they would form a good duo to look after the affairs of Istanbul (Erdoğan himself having served as mayor of Istanbul in the 1990s). One day before the decision of repeal İmamoğlu expressed full confidence in the decision of the the YSK! Kılıçdaroğlu, the leader of the CHP, for his part, bears full responsibility for having kept silent in the face of all the violations in past elections and the referendum. The CEO of the largest capitalist conglomerate of Turkey, the Koç Holding Company, visited Ekrem İmamoğlu on the very morning of the day the YSK was expected to hand down its final verdict. There is little doubt that the CEO preached moderation to the mayor and reminded him of the extremely “delicate” straits that the Turkish economy is going through at the moment!

To break the chains that enslave the will of the people

It is now plain for all to see that the elections organised by the increasingly despotic regime of Turkey have no longer any legitimacy. What we need is not new electoral illusions but a full-scale mobilization for bread and freedom in order to save Turkey, and not only Istanbul, from its chains.

Boycotting elections should have been the choice for the local elections in the first place, which was the position of DIP in the run-up to the elections. But now it is imperative that the whole opposition against the despotic regime opt for a boycott. It would be pure illusion to think that a truly normal electoral process will unfold from here to the 23rd June, the date established by the YSK for the rerun of the Istanbul elections. Remember the weeks and months that separated the elections of June and the repeat elections of November in 2015 and you will understand what the coming weeks hold in store for Turkey!

Boycott alone is no longer sufficient! All opposition members of parliament should resign their seats and return to the bosom of the nation. Turkey’s agenda is neither Istanbul, nor early elections! Do not let the AKP and the MHP oppress the people! Boycott the rerun of the Istanbul elections! Evacuate the powerless parliament! Turkey’s future will be determined by the struggle in the squares of cities. Only when that struggle is successful will there be an election for a free Constituent Assembly, without any prohibitions or electoral thresholds or chains! Only a Consituent Assembly can respond to the demands of bread and freedom of the people!