“Black, brown, and white; workers of the world unite!” Workers’ action against racism and police terror in Oakland, California 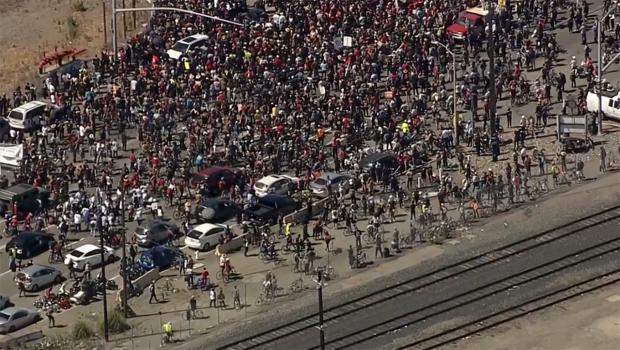 Our readers would know well about the popular revolt that erupted in the USA upon the murder of George Floyd, a black security guard, by the police. In its third week, the revolt has spread from Minneapolis, where Floyd was killed, to the entire country, and has forced Trump to back down on his plans for a military crackdown.

However, as we have stated before, the participation of the working class with its own organizations had been noticeably limited, with a few important but individual exceptions. On June 19th, Friday, the longshore and warehouse workers of the West Coast took an important step to overcome this boundary. The International Longshore and Warehouse Union (ILWU), one of the strongest and most militant unions of the US, took action in solidarity with the anti-racist rebellion under the guidance of its Bay Area locals. From San Diego on the Mexican border of California to the state of Washington on the north, all 29 ports on the West Coast remained shut down for a full shift (8 hours). Simultaneously, in Oakland, one of the most important port cities of California, and the city that had witnessed the birth of the Black Panthers in 1960s, the ILWU organized a rally, which about twenty thousand people attended.

June 19th is a very important holiday for African Americans. On that day in 1865, the Emancipation Proclamation that announced the end of slavery was finally read publicly to the slaves in Texas, almost three years after its announcement. Since that time, it is celebrated as an Emancipation Holiday by African Americans.

The ILWU, a union with roots in the 1934 General Strike, has been the most militant of the West Coast since its early days. Throughout the years, they have spearheaded many struggles, both economic and social-political:  they have participated in the Civil Rights Movement, fought militantly against racism, and organized strikes against the Pinochet regime in Chile, the Apartheid regime in South Africa, and imperialist wars in Iraq and Afghanistan. They were also able to organize the most crowded May Day action of the country amidst the Coronavirus pandemic, and lately stopped work for 9 minutes on June 9th, on the funeral day of George Floyd.

The rally in Oakland attracted some twenty thousand people, with the support of left and socialist organizations, unions, and minority defense and advocacy groups. The 4-km march from the Port of Oakland to the city center went on unabated despite the burning heat and the risk of Covid-19. “Black lives matter!”, “Workers fight, people fight!”, and “Black, brown, and white; workers of the world unite!” were among the most-chanted slogans. The march stopped only by the Oakland Police Station, where a high number of black inmates remain arrested. Here, the former Black Panthers delivered salvos against the police arrests and the racist practices against the non-white arrestees and called for the defunding of the police in their speeches. Some speakers pointed at socialism as the ultimate solution to racism and police terror.

During the rally spoke local and international leaders of the ILWU, such as Trent Willis, Jack Heyman, Clarence Thomas, and Keith Shanklin, as well as some historic figures of the black and socialist movements such as Angela Davis, Danny Glover, Cat Brooks and former Black Panther Gerald Smith. The speakers touched upon a number of important topics, from police terror to the risk of the privatization of the Port of Oakland by hawkish real-estate developers, and from the fate of black and political prisoners to the impact of Covid-19 on the African American community. Trent Willis, the President of the ILWU Local 10, criticized the two-party system, stated that both parties represented the rich, and called for an independent workers’ party in an interview he gave during the rally. The retired longshoreman and an important leader of the ILWU, Jack Heyman, targeted both the Trump administration and the Democratic presidential nominee Joe Biden, reminding the audience that Biden was the author of the racist Crime Bill of 1994. Deeming Sanders’s call for “political revolution” insufficient, Heyman stated that the US needed a “social revolution”.

Through this action, the ILWU took the first step in the participation of the working class in the popular revolt with its own organizations and demands – precisely what is needed to carry the revolt itself a step forward. If other unions and socialist organizations follow suit and demonstrate their solidarity with the revolt through their actions, this would be both a major cornerstone in the overcoming of racism, the historic disease of the US, and push forward the revolt itself to target head-on capitalism as a whole.