The battle for the Referendum in Greece (6) 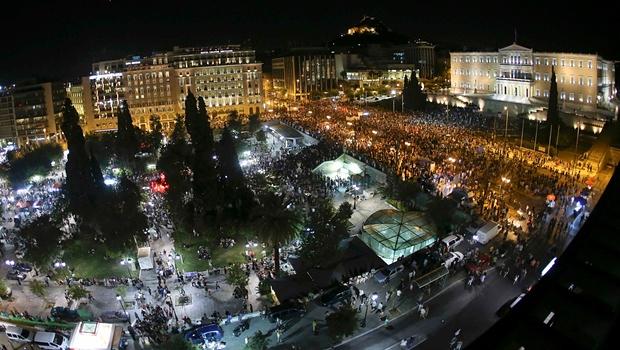 It is a great moment for the Greek people, for all the oppressed all over Europe, all over the world. OXI, a defiant, proud, massive popular NO has triumphed against the arrogant ultimatum posed by the imperialist institutions of the IMF and the EU for a permanent barbaric austerity.

About 62 per cent of the voters supported the No. Only about 38 per cent voted Yes. In the working class areas the vote was raised into an incredible 70-80 per cent! The infamous leader of the Right Official Opposition, of the New Democracy, Samaras had to resign.

We have experienced an unprecedented campaign of intimidation of the Greek people, internationally orchestrated by the centers of global capital. The closure of the banks imposed by the decision of the European Central Bank to cut liquidity the week leading to the referendum produced enormous pressures and fear. Imperialist  blackmail was fully supported by all Greek bourgeois opposition parties, all the bourgeois mass media, the SEV( Confederation of Greek Industrialists), the  bankers, the trade union bureaucrats of the GSEE( Confederation of Labor)  and ADEDY (the Federation of  Civil Servants), by the reactionary bishops of the Church , and a reactionary  pro-EU “civil society movement” organized from above on the pattern of Euro-Maidan in Kiev. All the enemies of the working class and of the impoverished people combined their forces to secure a victory of the Yes.

Among the Left, the Stalinist Communist Party boycotted the No vote, calling for a null or abstention.

This Unholy Alliance failed miserably to achieve its reactionary goals. They underestimated the strength, the anger, the resistance, the fighting capacity of their victims: of the workers, of the millions of jobless and pauperized people, first of all of the younger generation without a job and without a future.

The  political turning point that demonstrated what  was boiling behind the surface  took place the last day of the public campaign for the referendum, with the  extraordinary popular mobilization in Syntagma,  last Friday July 3. The real social force of historical change came into the arena of class struggle, as the real protagonist. A new phase of revolutionary radicalization has started and with it a new transition towards a decisive confrontation.

Vangelis Meimarakis, former  Chairman of the Parliament and now  interim Chairman of New Democracy, threatened in openly class terms the victorious people, in his first  comment on the results: “The  bourgeois class  that supported the Yes  will give its own answer if an agreement with the EU is not achieved”.

The danger comes not so much from the camp of the defeated Right but rather from the leaders of the victorious Left. The Syriza government made repetitive calls for “national unity and for “no break with the EU”. Tsipras asked the President of the Republic to call a meeting of all parliamentary parties to elaborate a common stand in future negotiations for a “reasonable deal” with the EU. The Syriza demands class peace and class collaboration in conditions of an open class war.

As the Communiqué of the Political Bureau of the EEK on the victory of the NO insists saying “No concessions, no new retreats before the class enemy, the imperialist troika and the Greek bourgeoisie! We won a battle but the class war continues until the final victory, workers power and Socialism in Greece and all over Europe!”

A new chapter in the history of the world capitalist crisis and social revolution has opened. In these new conditions, the EEK is preparing to host the 3rd Euro-Mediterranean Conference of social movements and revolutionary organizations of Europe, the Balkans and the wider Mediterranean region in Athens, on July 18-20, to elaborate collectively an analysis of the current situation, a perspective of struggle and a common plan of action.