The battle for the Referendum in Greece (3) 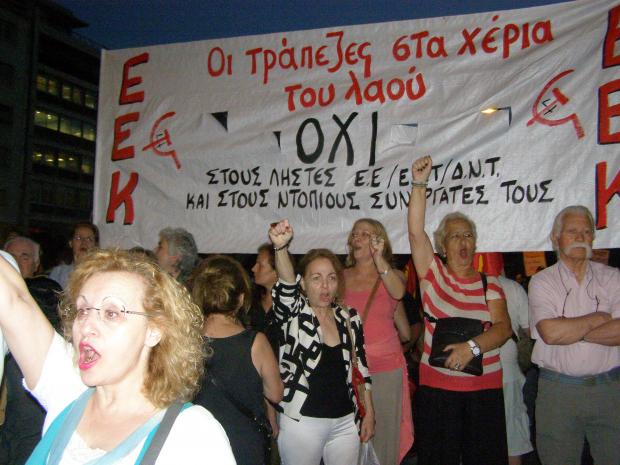 Tension and pressures are increasing every day. The European Council tried -unsuccessfully- to prevent the coming Referendum on the EU ultimatum to Greece as ...“illegal”. But pressures to cancel the referendum came also from within the country, not only from the Right wing and the other smaller bourgeois opposition parties, but also from within Syriza, from well-known cadres of the party, members of the European Parliament elected on the Syriza list (the “Green” K. Chrysogonos and the journalist St. Kouloglou) and left intellectuals, such as the “Third Worldist” Kostas Vergopoulos, well-known in France and Latin America.

The campaign of intimidation for the victory of the Yes by capitalists, mass media, bourgeois politicians, and the trade union bureaucracy of the nearly inexistent GSEE (General Confederation of Labor), which had disappeared from the scene for many months, particularly after the January 2015 elections, is intensifying. Confusion and discontent are spreading as a result of the closure of the banks and the anxiety of pensioners to get their paltry pension.

Tsipras made a last-minute desperate attempt, sending a letter to the leaders of the troika, Draghi, Juncker, and Lagarde, accepting many of their demands in the last ultimatum put on referendum. But all “discussion” on this proposal of capitulation is postponed for after the referendum. It becomes obvious that the goal of the troika is the victory of the Yes, the crushing defeat of Syriza and the overthrow of the Tsipras government, to be replaced with “a new government with the necessary credibility to discuss with the European institutions”, as Schäuble and Juncker have said. The emergency meeting of the Eurogroup of Finance Ministers of the EU ended also with the same postponement of any discussion for the aftermath of the referendum.

“They blackmail the Greek people either to accept and say Yes to an endless horror of austerity or, in the case of No, to be condemned into a horrible end, of social and economic chaos,” said Savas Michael-Matsas, secretary of the EEK, in his speech in the successful public rally of the Trotskyist Party in front of the old building of Athens University at the center of the Greek capital. “Our task” he said “is to defeat both an endless horror of austerity as well as a terrible chaos by putting an end to the ravages of bankrupt capitalism and open a socialist way out of this inferno.”

In the midst of cheers and applause by the crowd, which included also many rank and file supporters of Syriza, he concluded: “We have to reject the imperialist ultimatum by a triumphant NO next Sunday as the beginning, not of new hopeless negotiations, but of an uncompromising struggle of the working class and the popular masses to cancel the debt, nationalize the banks and the strategic sectors of the economy under workers controlby takingpower and initiating the socialist revolution in Europe. In this way, we could celebrate in 2017, in two years, the centenary and coming back of the Great October Socialist Revolution of 1917”.