The battle for the Referendum in Greece 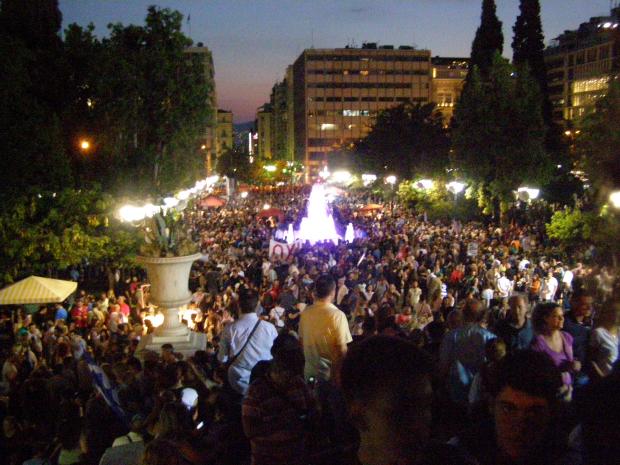 More than 200 thousand people assembled in Syntagma Square, in front of the Greek Parliament in a tremendous mass rally supporting “No”, in the coming Referendum on July 5 for the ultimatum posed by the EU, the ECB, and the IMF to Greece to accept a new round of measures of social cannibalism or to be evicted from the Euro-zone (the infamous “Grexit”) and then from the EU. The days of the historic popular mobilizations in the years 2010-12, when first the troika of EU/ECB/IMF with the willingly servile Greek bourgeois governments imposed the infamous “bail-out” programs tied with the “Memorandum” of draconian measures of “austerity” to save their banks by starving the people of a bankrupt Greece.

The last five years, social polarization and radicalization produced a massive turn to the left, which finally led to the electoral victory of the left reformist Syriza on January 25, 2015, on the expectation that it will end “austerity”. Five months of fruitless “negotiations” of the pro-EU Syriza with the hostile troika of EU/ECB/IMF has finally collapsed.  On June 22, a desperate Tsipras government, under the blackmail of conditions of financial asphyxia imposed by the ECB, was at the point of full capitulation accepting a new program of austerity, worse even than the previous ones that the neo-liberal governments of PASOK and the right-wing New Democracy had imposed in 2010-2014. But at the last moment, on June 24, the IMF introduced more barbaric measures. Already the signs of a Syriza capitulation had produced a vast popular discontent in Greece and a real rebellion in the ranks of Syriza itself. Returning to Athens on June 26, Tsipras faced the dilemma either to commit political suicide himself and his government or to make a new turn. Thus, he announced that the troika ultimatum would be posed for a referendum to be decided by the Greek people itself by a “Yes” or a “No”.

This turn produced hysteria in all the centers of global capital, in Brussels, Berlin, and Washington first of all. The leaders of the imperialist institutions expressed their fury demanding a “Yes” by the Greek voters and  a change of government. The collaborators of the troika in Greece, the bourgeois opposition parties (including the Nazis of the “Golden Dawn”) staged a counter-revolutionary  anti-communist mobilization of the middle class  named “We stay in Europe” , which revives memories of Allende's Chile in 1973.

Disgracefully, the Stalinist Communist Party boycotts the “No” in the referendum, claiming that a No to the clear and direct question “Do you accept the terms of the EU/ECB/IMF, Yes or No?” indirectly means... a “Yes” to the government austerity plan... Practically by printing and distributing a ballot with the name of the Communist Party (KKE) and its slogans, (of course, legally this does not count and it is considered as “null”) the Stalinists promote an “abstentionism” in favor to the  capitalist parties and system.

The EEK, although criticizing the policies of class collaboration and adaptation to the EU of Syriza and the entire logic of fake “negotiations”, is actively campaign for a NO in the Referendum advancing as well a transitional program of cancellation of the debt, nationalization of the banks under workers control, a restructuring of the economy on new socialist bases, a break from the imperialist EU and for the socialist unification of Europe.

We participated today under our own banners in this tremendous rally in Syntagma, and we organize our own EEK rally in front of the old University in the center of Athens next Wednesday, July the 1st—one day after the non-payment of 1.5 billion euro to the IMF. Other public meetings of the EEK will take place in cities all over Greece the next days. The Secretary of the EEK Savas Michael-Matsas gave today an interview in the main News bulletin of the National Radio Station ERA, presenting the position and analysis of the Trotskyist party, criticizing as well the attempt by the government to use the referendum as a card for an impossible renegotiation with the EU. The main evening pro-Syriza daily Efsyn published the Resolution of the Central Committee of the EEK on the referendum.

A new chapter of the world capitalist crisis that erupted in 2007-2008 has been opened. Already the resistance of the Greek people that imposed a referendum on the imperialist ultimatum has produced globally a tsunami in all financial centers and a panic among the imperialists themselves who try now to advance a kind of post-modern coup d'etat to establish their government of servile stooges in Athens. Merkel, Juncker, Hollande, the President of the European Parliament Schulz, the leaders of European Social democracy are daily intervening bluntly demanding a victory of the “Yes” and “regime change”.

This is class war. Despite the difficulties, the confusion, the panic produced by the Greek “corralito” imposed by the ECB, we are fighting with all our might, dedication, and confidence in the final victory of the working class in the developing confrontation between social revolution and counter-revolution.