The banner of proletarian internationalism in Rojava 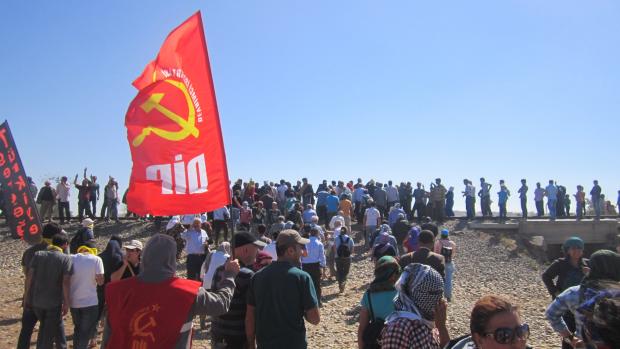 On the 25th and 26th of September, 2014, representatives of the Kurdish population living in Istanbul on the West of Turkey visited the south-eastern border region with Rojava, i.e. Syrian or South-western Kurdistan, in order to express their solidarity with the Kurdish population of Kobani, one of the three cantons of Rojava which is currently under attack from the ISIL (the Islamic State of Iraq and the Levant). Among them was a delegation of the DIP, the Revolutionary Workers’ Party of Turkey, which joined the mission as a manifestation of proletarian internationalism in solidarity with the oppressed Kurdish people. On Friday, a section of the mission crossed the border into Rojava to visit the people of the villages around the city of Kobani. There, the DIP delegation together with the Kurds and some other Turkish socialists, greeted and embraced the Forces of Protection (YPG), the force set up to defend the newly autonomous Rojava.

In order to understand the full significance of this we should first remember that Kurdistan is a country partitioned and colonised, since World War I, by four countries, Turkey, Iran, Iraq and Syria. Southern or Iraqi Kurdistan became autonomous within a federal Iraq under US auspices after the invasion of Iraq in 2003. It is now ruled by Massoud Barzani, a henchman of the US and its junior partner in the region, Turkey under Tayyip Erdogan’s AKP. Rojava, or Syrian Kurdistan, the second region of Kurdistan to become autonomous, this time in 2012, has a totally different political make-up. It is ruled by the PYD, a party affiliated to the PKK, a movement of socialist origins that has been waging a guerrilla war against Turkish oppression of the Kurds for the last three decades. Despite having moved perceptibly to the right since the capture of its leader, Abdullah Ocalan, kept in a Turkish island prison since 1999, it has nonetheless never become an ally of the US and, while negotiating with the AKP government for a peace deal, continues to sustain good relations with many sectors of the left in Turkey. Much more important is the fact that large masses of the Kurdish population in both Turkish and Syrian Kurdistan are in constant struggle against the regional powers and the US status quo in the Middle East.

Thus Rojava is a thorn in the side of the reactionary Turkish government and the Achilles’ heel of its so-called “peace process”. This government cannot stomach the de facto autonomy of this region, posing a model and a beachhead for further emancipation for the enslaved Kurdish population of the Middle East. The Turkish government therefore lends the ISIL all kinds of logistical support in its war against Rojava, which is also one more excuse for the Turkish government to insist on the so-called “secure zone” or “buffer zone” inside Syria, a demand put up so as to invade Rojava and move to bring down Bashar al Assad of Syria with a view to establish a friendly Sunni government in Damascus. Only a fortnight ago, the Turkish government was insisting to remain outside of the US coalition formed against the ISIL. It has now changed its stance and is trying to use this US war to revive its feud with the Assad regime and to put down Rojava.

The DIP is unequivocally opposed both to Turkish intervention in Syria, without extending any political support for Assad himself, and even more emphatically to a so-called “buffer zone” in the north of Syria, tantamount to Turkish military occupation of Rojava. We call for respect to the newly-acquired autonomy of the Kurdish people of Syria and the recognition of the right to self-determination for the Kurds of Turkey as well. We in fact regard the liberation of the whole of Kurdistan as an indivisible whole. This explains the most reactionary aspect of the policy of Barzani, the US henchman, who disregards the struggle for emancipation of the rest of the Kurdish nation or even positively collaborates with its oppressors outside of Iraqi Kurdistan.

This gives its whole meaning to the presence of the DIP delegation in Kobani, Rojava. Our comrades joined hands with thousands of Kurds, from Istanbul and from the Kurdish region of the country to bring down the barbed wire of the frontier and to trample upon the artificial border set up between the different parts of Kurdistan to march into Rojava and embrace the Kurds of Kobani fighting for their land and freedom. The other socialists present were almost all followers of parties that tail-end the Kurdish movement, are merging into it and are gradually being assimilated. It was the DIP, the Turkish Marxist party that supports the Coordinating Committee for the Refoundation of the Fourth International, which, despite its modest size, represented the political line of proletarian internationalism in this glorious action that will be remembered for its bold statement of support to the emancipation of the oppressed Kurdish nation in all the parts of the country divided and plundered by four reactionary regimes of the Middle East!

Socialist tail-ending of the leadership of the Kurdish movement nowhere shows its risks more clearly than the Kurdish movement’s ambivalent stance with respect to US intervention in the Middle East. The leader of the PYD, Salih Müslim, has unequivocally called for military intervention on the part of imperialism in defence of Rojava, naming NATO explicitly! The PYD is a sister party of the PKK, which makes the policy of the whole Kurdish national movement vulnerable to collaboration with imperialism. On top of this, the new party formed by the Kurdish movement in collaboration with nearly a dozen Turkish socialist movements, the Peoples’ Democratic Party (HDP in its Turkish acronym) moves along a slippery slope of support for Erdogan and the AKP. We call on the rank and file of the Kurdish movement and the workers, poor peasants and youth of Kurdistan to stand up against this backward policy of capitulation to the reactionary regional status quo.

Down with the sectarian and reactionary ISIL!

Fight sectarianism on the basis of proletarian fraternity and the defence of the oppressed nations! Kick the imperialists out of the Middle East!

For the right of self-determination to the Kurdish people!

Long live the Socialist Federation of the Middle East!