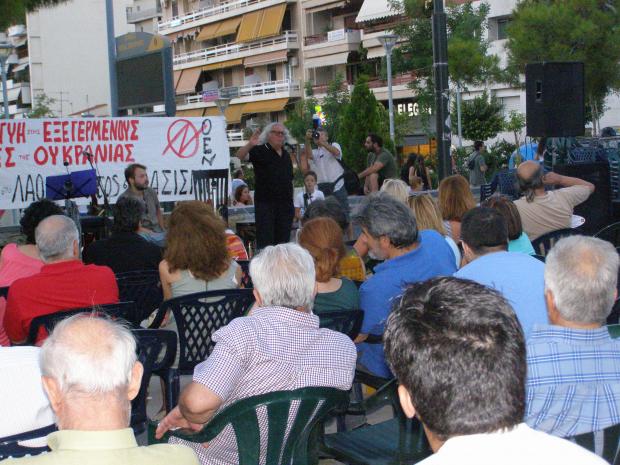 Following the 2nd Workers Euro-Mediterranean Conference, held in Athens on March 29-30, 2014, and on the basis of its conclusions, results, and prospects , the Balkan Socialist Center “Christian Rakovsky” waged an intensive political activity in the Balkans, connecting with activists involved in various struggles that erupted in the Peninsula in 2013 and 2014, from Bulgaria and Bosnia to Greece and Turkey, and intervening in on-going political-ideological debates within the social movements and the Left. Inescapably, the explosion in Ukraine and the rebellion in Donbass came into the center of our discussions in different meetings as well as the fight against the EU draconian measures imposed in the region and the fight against the rising fascism all over Europe, from Ukraine and Hungary to Greece and France.

We intervened as speakers in many panels in the international event that was organized by the World Social Forum in Sarajevo in June commemorating the centenary of the First World War making clear our revolutionary internationalist demarcation line from all pacifists, reformists and pro-EU forces dominating the WSF. Both in Sarajevo and above all in Tuzla, the hotbed of the proletarian uprising of February 2014, we had fruitful discussions and established fraternal relations with the local activists in the Citizen Plenum( a kind of People's Assembly or soviet type grass root organization).

We extended our work further with discussion in Belgrade, Serbia. On July 1-3, 2014, a delegation of the EEK headed by its General Secretary Savas Michael-Matsas, on behalf of the Rakovsky Center visited Bulgaria, in the middle of a tremendous banking and government crisis shaking the country but also the European banking system ( as immediately after, the crisis of the Banco Espirito Sancto in Portugal stormed Italy, Spain, and Greece as well).

A successful public meeting was held in Varna, organized by the Solidarity Center of the city by the Black Sea, which had invited the EEK. The Solidarity Center of Varna was founded by young workers that took part in the February 2013 rebellion and had participated also in the 2nd Workers Euro-Mediterranean Conference in Athens. Present in the meeting were dozens of youth as well as representatives of the Bulgarian Socialist( former Communist) Party and of the Bulgarian Workers and Peasant Party( a split from the BCP). After giving a detailed report on the class struggles in Greece and the policies of the EEK, we presented our analysis and positions on Ukraine as they were agreed in the Resolution of the 2nd Workers Euro-Mediterranean Conference and the International Statements that we had circulated after the armed rebellion in Eastern-Southern Ukraine. The response was very positive. It was not difficult at all to the |Bulgarian comrades to see the interconnections between the situation in Ukraine and in their country, the failure of the “transition to the market”, the role of the US and EU imperialism, the function of the oligarchs.. We have to emphasize that the perspective for a Balkan Socialist Federation becomes more and more popular not only among us but also among revolutionaries and activists in Bulgaria and Serbia.

The meeting started in 20.00 pm but the discussion with the younger comrades in the Center continued until the early hours of the next morning(!) and practical decisions on our common steps were taken.

From Varna , the EEK delegation went to Sofia, where we had a very fruitful discussion as well with the Autonomous Workers Union.

It is clear that the Balkan Socialist Center “Christian Rakovsky” founded during and against the war of NATO against former Yugoslavia, after a period of relative inactivity, comes again powerfully in action as the Balkan masses themselves enter in the arena of revolutionary class struggle.

We want to add in this brief report some activities, among many others, in relation with the crisis in Ukraine.

In the Anti-racist Festivals in Athens, Thessalonica and Volos in July we presented our policy towards Ukraine, sharing the panels with other representatives of the Greek Left, Syriza and Antarsya, as well as with a Comrade from the left communist Ukrainian organization Borotba(Struggle).

Two comrades of the RedMed network, who have also participated in the 2nd Workers Euro-Mediterranean Conference, have visited Odessa, Ukraine. They had the opportunity for a first hand contact with local activists and with the reality of the crimes of the Ukrainian fascists, covered up by the imperialist mass media but also by the European Left, including the liberal “far left” internationally.

In Athens, in one of the biggest squares of the Greek capital, in Nea Smyrni, the EEK and its youth, the Organization of Revolutionary Youth (OEN) have organized with a big success on July 11 a Festival of Solidarity to the peoples of Donetsk and Gaza under imperialist war aggression. In our Festival many well known radical theater companies and music groups took part. The main speakers were Savas Michael-Matsas from the EEK and Nikos Tziris form the OEN. With them, three Ukrainian workers from the Donbass region took the floor and addressed the rally while their delegation among the public raised, together with our red flag of the Fourth International, their flag of the People's Republic of Donetsk now under siege.