by The Popular Front for the Liberation of Palestine
May 31, 2017 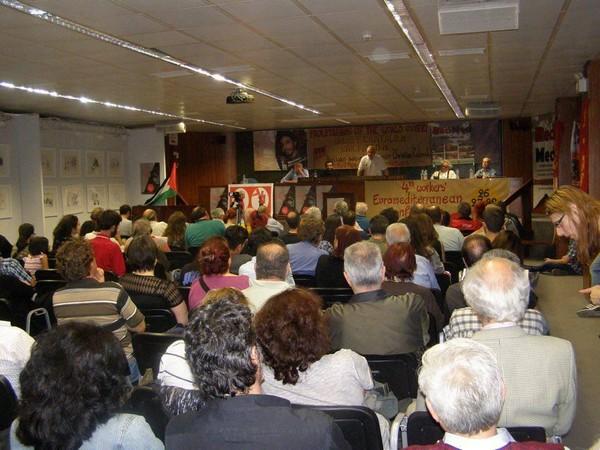 The Popular Front for the Liberation of Palestine participated in the 4th Emergency Euro-Mediterranean Conference, of which our website RedMed is one of the organisers. Here we publish a report of the conference by the web site of the PFLP.

The Emergency Fourth Euro-Mediterranean Workers Conference adopted a resolution to support and work with the proposal of the Popular Front for the Liberation of Palestine “to start working towards a united anti-imperialist, anti-Zionist international initiative that will also fight all other kinds of reaction that are on the rise in the Middle East, in the Balkans and in the Mediterranean region at large. The Conference declares its intention to engage in discussions with the PFLP and other appropriate organizations, left political parties and workers’ and mass movements to establish the terms, the composition and the tasks of such an international initiative.”

This initiative was adopted in Athens, Greece at the conference, convened between May 26-28, which focused on the increasing threats to workers’ movements in the region from imperialist and local reactionary forces. Looking at the situation from the exploitation of Greek debt to impoverish the Greek working class and confiscate the people’s resources, to the heavy repression imposed by the Turkish state, to the attempts of the Israeli occupation state and the United States to attack and liquidate the Palestinian cause on the 100th anniversary of the Balfour Declaration.

The conference was hosted by the Balkan Socialist Center “Christian Rakovsky” and the RedMed network, following three earlier conferences organized by the same organizations. Along with marking 100 years of the Balfour declaration, the conference also commemorated 100 years of the October Revolution, looking at revolutionary alternatives to struggle against capitalism and imperialism. Organizers discussed the growing resistance amid devastating conditions, including confrontation of the policies of Donald Trump as recently represented in Riyadh, followed by his visit to Palestine.

The conference included lengthy discussions of the need to build unity and alliances among left forces and workers’ and mass movements in the region to confront imperialism, Zionism and local reactionary forces serving their interests in a collective manner, emphasizing that this is a moment of great danger for the peoples of the world and also one of great importance for confronting imperialist war and its proponents in the United States, Europe and elsewhere in the region.

The conference also included discussion of the Palestinian political prisoners and, in particular, the mass hunger strike that was suspended during the conference after 40 days of struggle. Mohammed Khatib of the Samidoun Palestinian Prisoner Solidarity Network spoke at the opening of the conference.

“It is critically important for communist parties and progressive forces in the Mediterranean region to come together to confront colonialism and fight imperialism and Zionism, as well as the forces of the extreme right,” Khatib said. In particular, he focused on the intensifying programs seeking to tie the economies of the region to the Zionist state, noting that Palestinian resources like natural gas and water are being confiscated for pipeline deals at the expense of the wealth and interests of all of the people of the region and for the benefit of the occupation state and its imperialist strategic partner, along with local reactionary forces.

He urged joint struggle and mutual solidarity to build boycott campaigns and anti-normalization campaigns against these exploitation agreements as well as to struggle collectively to confront racism, occupation, capitalism, Zionism and imperialism. Khatib also called on all to build the struggle to free political prisoners, in Palestine and around the world, including in Greece, Turkey, Bulgaria, Poland, Ukraine and Argentina. In particular, he urged a higher level of mobilization for the release of Comrade Georges Ibrahim Abdallah, the revolutionary Communist Arab struggler for Palestinian liberation imprisoned by France for 33 years.

Conference attendees expressed their solidarity with the Palestinian liberation struggle and pledged to work together to confront the forces threatening the people of the region.