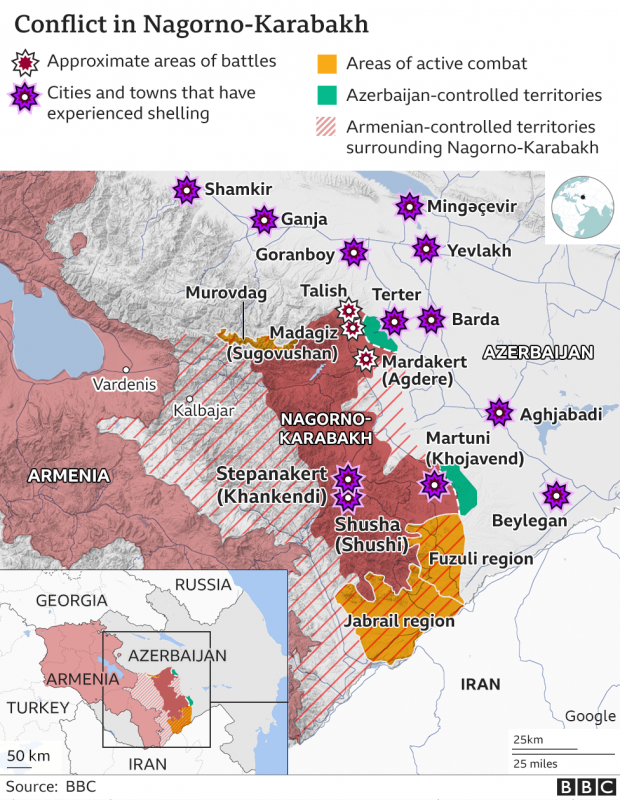 The war between Azerbaijan and Armenia over Nagorno-Karabakh, which began "suddenly" on September 27 on the contact line between the armed forces of Nagorno-Karabakh and Azerbaijan, and which has been going on for more than a week with the official support to Azerbaijan by Turkey, has already claimed thousands of lives, including hundreds of lives of women and children, led to the destruction of houses, hospitals and schools, roads and other infrastructure. The call of Russia, the United States, and France "for the immediate and unconditional establishment of a ceasefire" on October 5, 2020, did not stop and could not stop military operations. Various statements by State, political, and public figures and organizations do not mention the true causes of this war and those responsible for it.

This war, like a number of other wars in the post-Soviet space, in Europe and other parts of the world, is actually organized and supported financially and by all other available means by the so-called "global capital," and primarily by American and European public and private structures and individuals, a number of oligarchic clans of these countries. The main and ultimate goal of all these wars was is a new partition of the world, the neocolonial "development" of the territories of former socialist countries, including the former Soviet republics, and so far formally independent countries that did not call themselves socialist, the establishment of a hidden or almost open protectorate regime in them. The main and final reason that allowed the outbreak of these wars was and is the criminal collapse of the USSR, the personal responsibility for initiating which lies primarily with Gorbachev, Yeltsin, Kravchuk, and Shushkevich.

Therefore, a genuine and lasting establishment of peace in Nagorno-Karabakh and throughout the world is possible only in the new socialist world, as a result of the reconstruction of the USSR in the former or in the new borders - from Lisbon to Tokyo, and from Tokyo to Washington. Therefore, the transformation of current capitalism in the "center" and in the "periphery," capitalism which carries death, human exploitation by man, and a permanent and a steadily growing economic and environmental crisis, with temporary recessions and recoveries, is the main and urgent task of all communists, the entire world proletariat, still skillfully dominated by capitalists, primarily by means the illusion of the "American dream," "European values" and nationalism.

The solution of this task can be achieved only as a result of the long and difficult struggle of the united proletariat of the capitalist "center" and capitalist "periphery," the existing socialist countries - China, Vietnam, Cuba, Venezuela, Nepal. But at the same time, the war in Nagorno-Karabakh should be stopped right now. Therefore, we demand:

Everything must be done to stop war and fascism, to prevent a fratricidal slaughter in Nagorno-Karabakh, hidden and open imperialist aggression against the peoples of Armenia and Azerbaijan, other peoples of the world, from whoever and in whatever form it emanates.