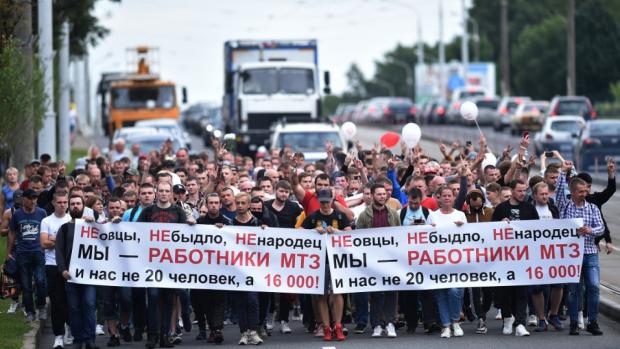 The events that have taken place in Belarus since the presidential elections, which have been watched with alarm and concern by all people who wish to benefit Belarus and its people, are caused by a number of related internal and external contradictions. Ultimately, these contradictions are caused by the evolution of capitalism in the former Soviet republics, in Europe and around the world. As such, they can be resolved only during and as a result of the transformation of "peripheral" and all other capitalism into socialism, into a new society, where finally the slogans of the Great French Revolution "Freedom, Equality, Brotherhood!" will become a reality, and the slogans of the Great Russian Proletarian-Peasant Socialist Revolution in October 1917 "Factories – for the Workers! The land is for peasants! Power - Soviets! Peace - to the nations!" will gain a new full-fledged content and development in reality.

While such a transformation has not yet been put on the agenda today, it is possible and necessary and we should do everything to bring this day as close as possible and move forward on the path of much-needed progress for everyone, especially in Belarus. It is necessary to preserve everything achieved in Belarus, including free universal education, free medicine, the actual absence of unemployment, the provision of food for their own agriculture, confidence in the future and even cleanliness in the streets and squares of Minsk and other Belarusian cities. and do not allow these achievements to be destroyed and the country itself. We consider it is necessary to make it part of politics, the following necessary and binding measures are aimed at maintaining and developing these achievements:

1. Unconditional renunciation of any and all proprietary pretexts of privatization of existing State-owned enterprises, as enshrined in the new Constitution of the country;

2. Unconditional refusal to transfer to private ownership of land, as enshrined in the new Constitution of the country;

4. Introduction of mandatory effective working control at all public and private enterprises, including the introduction of representatives of working collectives with the right of "veto" to the governing bodies of all enterprises;

5. Guarantee of freedom of speech, assembly, conscience and other civil liberties as well as the freedom to create trade union s, social and political organizations of workers;

6. The task of the drafting of the new Constitution of Belarus and its discussion belongs first of all to the trade unions, and all the social and political organizations of workers, including organizations of creative intelligentsia;

7. Preservation and development of integration processes with Russia on a mutually beneficial basis, excluding any violation of the equality and interests of the two countries, and first of all, on the basis of the interests of proletariat.

8. Opposition to any form of interference or domination by the EU, US and NATO in Belarus.

These measures and policy on the whole aimed at the preservation and development of Belarus for the benefit of its own people and the historical interests of the employees can undoubtedly be successfully implemented if every effort is made to preserve the independence of Belarus from imperialist domination and for a renewed socialist construction, without oligarchs or bureaucratic authoritarianism, and if both the authorities of Belarus and the public political forces supporting the policy of the President of Belarus, as well as all sane associations and citizens in opposition, proceed from the principle of “do no harm” and use all their efforts to preserve and develop Belarus.