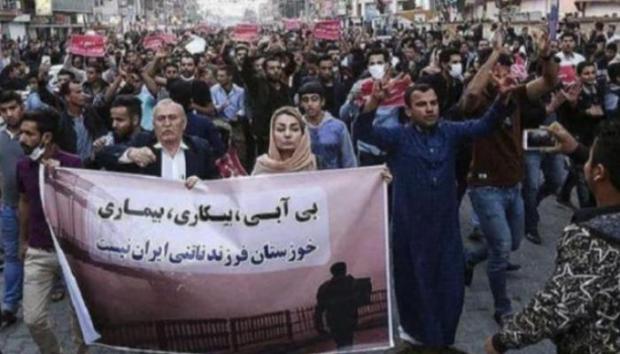 Iran has rejuvenated with demonstrations and strikes. The state of the Islamic Republic of Iran reacted with violence as expected. Yet the masses have already begun calling for the unity of all peoples in Iran. We are relaying the events from the pen of an Iranian comrade.

Water policy plays a central role in Iran’s industrialization strategy after the Islamic Revolution. For example, the ex-president Hashemi at one point started a new dam project every month, which would earn him the nickname “the builder in charge”, transferring water from wetlands to arid regions. Likewise, Ahmedinejad brought to life the biggest dam project yet in the country. This project aimed to transfer water from the Arab majority Khuzestan province bordering Iraq to the center of Iran, as well as to generate power. Not heeding the warnings of experts, the project was located next to a salt mine. Soon after its operation, 250 million tons of salt leaked into the waters and caused an immense environmental catastrophe. Agriculture in the Khuzestan province came to a halt, acres of date fields burned and turned arid. 63 villages were submerged underwater, 12 thousand people had to leave their homelands. The salt also affected electricity production. This disaster was not the first time the region has been wronged. As the oil basin of Iran, Khuzestan was also at the center of the Iran-Iraq war in 1980-1988 and was left to its own devices, bereft of any investment or aid, as a result of the policy of prioritizing industrialization in the central cities of Tehran and Isfahan.

Natural disasters, war, and the policy of privatizations which is no less harmful than the single-minded focus on the central regions were unleashed on the people of this peripheral province. The struggles of Haft Tappeh workers in the previous years, and the strike of the oil industry workers, which spread out like wildfire this year, are signs of a people raging with a fighting spirit, and with nothing to lose. Khuzestan was also among the centers of the huge popular revolt that took place in the November of 2019. The scattered peasant riots were repressed by force, but never fully suppressed.

What was once a bountiful place of grasslands and abundant water, Khuzestan is now a host to a thousand villages grappling with extreme aridity and the province with the highest rate of emigration. According to the reports by the Iranian parliament, the unemployment rate reached %25, making it the second-highest in the country.

The revolt in November 2019 was repressed harshly in the province, with many killed. As the calamities piled on top of each other such as the pandemic, high temperatures, many livestock lost to dehydration, collapsed ecosystem, poverty, and ethnic discrimination, the people rose again. Just like during the insurrection of November, protests started happening in different parts of the country in support of the revolt of the Khuzestan people. The state responded to its people demanding water by shedding blood. According to the video clips shared on social media, armed police vehicles enter villages in an act of war against the people. Official reports cite almost ten deaths and hundreds of arrests. Despite limiting access to the Internet, the state is unable to contain the popular slogan of “Arab, Persian, Turk, Unite, Unite!” in Tabriz, Meshed and Tehran.

Let the Iranian state try to suppress the revolts with the help of its armoured vehicles, charity wakfs, the manipulation of its embedded artists and actors (many actors tried to diminish the protests against long-running deprivation of the people to shortages of bottles of water by organizing charity drives to send them to the region, an act that has been fiercely rejected by the people who did not let the “aids” enter the cities), Khuzestan remains a volcano of people's revolt ready to erupt any second, just like many other regions.

Unfortunately, today we see the biggest organized opposition to the regime, Shah supporters, trying to subvert the revolt by claims such as “it’s the Iraqi police that are firing on the people, not the Iranian”, trying to pit Arabs, Turks, Kurds, Baluchis against Persians in a multinational country, trying to instigate a civil war based on race. This observation reminds us of the crucial necessity of socialists organizing in the service of internationalism and world revolution. Aridity, floods, earthquakes, and pandemics are all the products of capitalism, and the only solution is revolution.