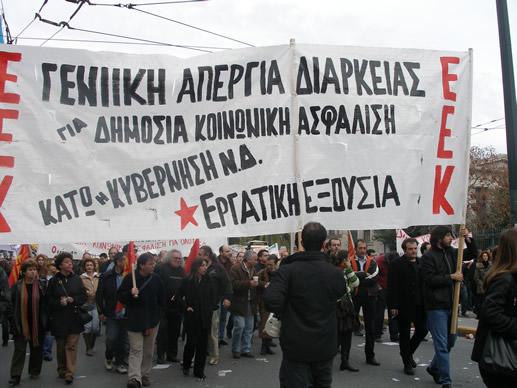 The Workers Revolutionary Party (ΕργατικόΕπαναστατικόΚόμμα, EEK-CRFI) is participating in the upcoming Εuro-elections in May 2014, proposing a revolutionary internationalist program of action against imperialism, a decadent capitalism in crisis, the bourgeois state and fascism.

We fight for the political independence of the working class from every nationalist and other bourgeois influence. We are against the imperialist EU but also against "euro-skepticism" of any color. We participate in the elections to fight for workers' governments in Europe, supported by institutions of workers' power, within the prospect of the unification of Europe on a socialist basis, building the Socialist United States of Europe.

We clearly distinguish our voice and our participation from all reformist, patriotic or bourgeois ballot, of an ethnocentric rejection of the European perspective or of a democratic "make-up” of Fortress Europe.

The independent presence of EEK in the class struggle and all the struggles and experiences of workers means that we do not rely on donors, financiers and economic interests, except on the support of EEK’s comrades and friends, the lacking of the oppressed and on anyone who understands the necessity of a revolutionary, internationalist ballot in the elections.

So we ask for your support, to be able to cope with the enormous financial obstacles the State erects against small parties and have-nots.

Any offer on the following bank account, is valuable to us.