Appeal to citizens of the Soviet Union, their children and grandsons

by The Association for Marxist Communities
December 25, 2016 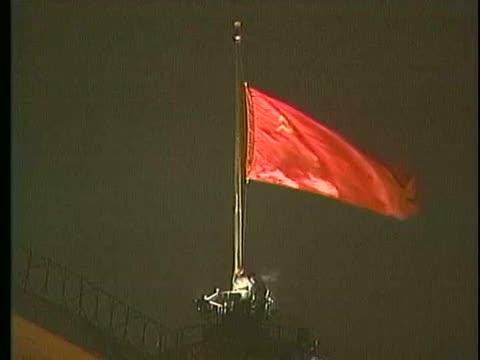 "In nine of 11 countries of the former USSR the majority (60% and more) inhabitants of 35 years and older thinks that life in the Union was better, than after his disorder"

(data of polls of sociological services in August, 2016)

Twenty five years ago, on December 25, 1991, from a flagstaff over the Kremlin a red banner of the Union of Soviet Socialist Republics (USSR) had been lowered slowly.

Having criminal trampled on the will of Soviet people which is unambiguously expressed on a referendum on March 17, 1991 to continue to live a uniform family in the united state, the small group of irresponsible and self-confident political laymans and upstarts has assumed the right to be rulers of the destiny of the centuries-old commonwealth of the people. With obvious connivance and indulgence of the President of the USSR they have organized a compulsory partition of the uniform country on a personal ancestral lands for targeting in each of them of orders in compliance with tastes of newly appeared "tsars", "khans" and other "(pre)residents". They have started looking for the curators of construction of new life among the authorities of "civilized" foreign countries.

Frank cynicism in relation to the former colleagues of the CPSU and own recognition in treason to the great country and the people which elected him as a first President RSFSR the servile report to the Congress of the USA about liquidation of the USSR of one of three participants of "Belovezhsky collusion", Boris Nikolaevich Yeltsin was heard on June 17, 1992:

"The world can quietly sigh. The communistic idol who created everywhere on the earth social discord, hostility and unprecedented cruelty which inspired fear in human community failed. Failed forever! And I here to assure you on our earth we won't allow it to revive!".

On October 4, 1993 these assurances were confirmed with the crime committed by him: the order on the armed storm of the House of Soviets and execution from tanks and machine guns of unarmed defenders of the constitutional Soviet system was given. Survived people were profaned also to brutal punishment by extreme anticommunists with the aim of edification. So in blood and violence decrees of an indisputable usurper of the power laid the foundation of nowadays existing political and economic system of capitalist Russia.

Twenty five years are quite sufficient term for the newly appeared Messiahs, and Yeltsin, naturally, was not one of them, could show efficiency of the way imposed to the country and its multinational people by deception and force. Under much more worst internal and international conditions Bolsheviks for the same period in 25 years after the October revolution of 1917 could create in the USSR the economic potential which ensured a victory in the Great Patriotic War of 1941-1945 against Nazi Germany with all other Europe. Their ideological and political antagonists - modern anticommunists, - can brag nothing in a present situation and are not able to justify their their anti-Soviet, anti-communistic policy including their violence against people in 1991 and 1993.

The industry and finance are built as a raw appendage in global capitalist economy that obviously undermines sovereignity of Russia, and, despite all attempts of “refomators”, can't reach at least the level of the last Soviet period of development of RSFSR of 1990 in any way.

But, owint to privatization and redistribution of assets of the former public property, differentiation of distribution of the current national income by the new ruling class - symbiosis of the highest bureaucracy and newly made oligarchy grew during this time. As a result "the one sixth part of the population of Russia concentrated in the hands 57% of all cash incomes and 92% of property incomes".

It would seem, B. N. Yeltsin's successor at government top in recent years, V. V. Putin puts a lot of effort into increase in defense capability of the country and restoration of its foreign policy positions. But actually Russia is still obliged for its independence by having the nuclear parity with the USA which has got in inheritance from former power of the USSR.

But complete alienation of its multinational people from the power became the most dangerous result of 25 years' political, economic and social "revival" of Russia. The people more than once showing in the past miracles of vital and military firmness, especially during the periods of external deadly threat were powerless before the cynical treachery of national interests by "ruling elite" disguised by demagogy. As a result us, most of citizens, deception robbed and continues already 25 years to rob insignificant minority - continuously growing rich ruling class of new misters of Russia. And to us the provision of the citizens surviving on the verge of poverty deprived of this education and culture losing advantage and responsibility for destiny of the Homeland is prepared. Such condition of a passive hopelessness of public consciousness is extremely necessary for ruling class in addition to smooth functioning of debugged mechanisms of imitation of pseudo-democratic procedures for providing and from now on control by his representatives of all authorities in Russia.

And still, as regular sociological measurements of public opinion shows, the most of the citizens of the former USSR (in Russia – 64%) having a possibility of comparison of the Soviet past with the present are ready to confirm declaration of will of the people on March 17, 1991 about preserving the USSR, the Soviet society and the Soviet conduct of life. Moreover, already a quarter of the younger generation which grew in new Russia as poll shows contrary to the unbridled anti-Soviet promotion of the last 25 years is convinced of benefits of the lost Soviet system. Continuous improvement of life of all people was a sense of existence of the Soviet state, in case of all its shortcomings.

Us, who assure that life in the Soviet Union was better, than now, still the majority! We were and we remain the Soviet people who will never reconcile with the imposed deception and force the political system which purpose is not prosperity of the multinational country, but enrichment of the most dexterous and unscrupulous minority at the expense of the section and plunder of the great country and oppression of most of its population.

It is possible to represent differently really fair society where each person is estimated on the work, on a contribution to general material and spiritual wealth of all people, to development of the whole country. It is possible to try to recreate such society by different methods, including beautiful declarations. But we are realists, and under contemporary conditions it is possible and it is necessary to return by all available peace and legal methods a sovereignty of the people, their faith in themselves and a capability to work in own interests and for the benefit of the country. It is necessary that the people could change nowadays neoliberal-conservative policy carried out by "ruling elite", disastrous for the country, to national policy alternative to it!

If the president of the country can't, or doesn't want, to give to the people of Russia an opportunity to exercise legitimate right independently to determine the future and a way of development of the country, all responsible citizens need – to use one the inherent constitutional right on direct declaration of will and action. We call all citizens, confident that life in modern Russia is worse, than in the Soviet Union, having postponed disagreements, to unite and start creation of the modern political mechanism, including information and technological which will provide independent direct declaration of will of the people and replacement of a present neoliberal policy by policy for the benefit of most of the people which strategic objective will be a transformation of present criminal and nomenclature capitalist Russia of "sovereign democracy" to the country of national democracy, to society of the valid justice, equality of all before the law and an authentic brotherhood. Only this way we can serve to all former republics of the lost USSR, having returned to our life a sense of all good that was in the USSR and that took away from us in case of its destruction!

The Association for Marxist Communities.