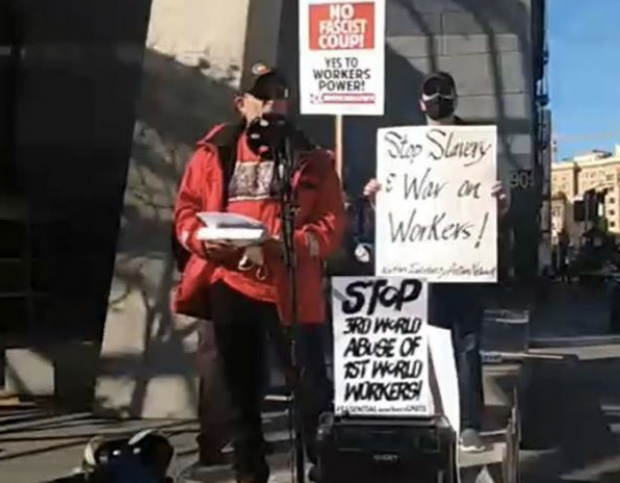 The United Front Committee for a Labor Party (UFCLP) and the Freedom Socialist Party (FSP) jointly hosted an anti-fascism rally on Saturday, January 9th, 2021 at noon in front of the San Francisco Federation Building. There were no other calls for a demonstration. The purpose of the rally was to protest the recent fascist coup attempt at the US Capitol. The rally lasted for an hour and a half. About five police officers showed up, but there were no serious confrontations between protesters and the cops. Among the speakers were Judy Greenspan from Worker’s World Party, Kristina Lee from FSP, Steve Zeltzer, Mehmet Bayram, and Lisa Milos from the UFCLP, John Reiman from the Democratic Socialists of America (DSA), and Edward Escobar from Independent Workers United.

Though the details of the talks differed, the primary take-home message from all speakers was that we need a labor party in the US, since it is clear neither the Democrats nor the Republicans will act to stop fascism.  Other speaker highlights included reading solidary letters from comrades in France, Argentina, and Turkey, historical lessons learned about anti-fascist movements from around the world, and a strong call to action for the working class to cooperate to topple capitalism and fascism. Overall, the rally went well. The mood leaving the rally was one of determination and hope.