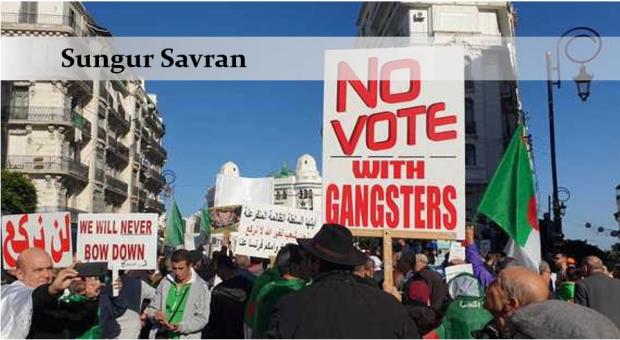 At least in the wilaya (province) of Bejaia. There the number of people who voted were a meagre 1,181. This meant a voter turnout of… 0.21 per cent, less than 1 per cent, if you cannot believe your eyes! The same rates apply to the wilaya of Tizi Ouzou and some localities in the wilayas of Boumerdès, Bouira, Bordj Bou Arreridj, Sétif and Jijel.

According to the supreme electoral authority (ANIE, euphemistically named Independent National Election Authority), overall voter turnout was 39.93 per cent. The turnout was extremely low among expatriates (8.69 per cent), which brought down the overall rate relative to the domestic rate of 41.14 per cent. This, of course, is the figure declared by the “independent” authority. The real figure, everyone believes, is around 20 per cent.

The regime was of course so worried about a second round that would be a rerun of the farce that one of the five candidates, Abdelmadjid Tebboune was immediately announced to be the winner with close to 60 per cent of the vote, quite unlikely in a five-some race, where all the candidates were carbon copies of the last president Abdelaziz Bouteflika.

The picture then is simple: keeping ourselves to the official figures, which no doubt contain a tremendous exaggeration of the turnout, roughly 40 per cent of the 24 million voters out of a total population of 43 million bothered to vote. Out of that 40 percent, 60 per cent supposedly, according to official figures, voted for the new president, Abdelmadjid Tebboune. The arithmetic shows that, in the best of cases, he received 5.8 million votes, to which we can afford to be generous enough to grant a rounding off to 6 million. That makes for 25 per cent of the electorate! What magnificent victory!

Not only did the Algerian people not vote, they also expressed their rage and refusal actively. On the day of the election, they chose to demonstrate. People were out in their tens or perhaps hundreds of thousands in the capital city Algiers, as well as Bouira, Tizi Ouzou, Bejaia, Tlemcen, Oran and others. Although the police attacked the demonstration in each city at a certain moment of its unfolding, the crowds dominated the city streets.

In certain cities and towns, crowds gathered in front of polling stations, stormed some, took away the ballots, went out and threw them in the air like so many bundles of confetti! Then the mostly young crowd hopped and leapt on the ballots. Later police were brought to keep guard in front of the polling station, but the demonstrators picked up the ballots and tore them up in front of the gaze of the police force. There is no doubt that under any other circumstances, even a fraction of such behaviour would have gotten the demonstrators into trouble, but in this case the police were frozen. Why? Because this is a revolution!

This was all on Thursday the 12th of December. On the 13th big crowds came out on the streets once again for the 43rd consecutive Friday. The Algerian people have been demonstrating every Friday since the 22nd of February, demanding a new regime and economic change. Students have come out every Tuesday, cutting classes if necessary. The immensely successful boycott and the activities around it are simply a new manifestation of the mood of the masses.

What is at stake?

As the reader of RedMed will remember, the Algerian revolution was triggered by the decision of the four-time president of the republic of the country, the paralysed and moribund Abdelaziz Bouteflika, to seek a fifth mandate in the elections to be held in the course of 2019. The mass pressure was so high and sustained that Bouteflika caved in and resigned. In other words, while seeking a fifth term he ended up ingloriously not even being able to complete his fourth term! (See our http://redmed.org/article/algeria-challenging-zombie-state.) In fact, Bouteflika was just a convenient mute figurehead (he was unable to utter even e few words since the stroke that befell him in 2013) for the gang that held power behind the façade formed by this once venerable ex-moujahid of the liberation war of 1956-1962 against French colonialism. The most important personalities of the special regime under his presidency were the younger brother of Bouteflika, a certain Said, and the chief of the general staff of the armed forces, Qaid Salah. Behind Said and Qaid was a great majority of the Algerian bourgeoisie, enjoying the fruits of a clientelistic and protected capitalist accumulation process, in a country rich with oil and natural gas.

Seeing through the explosive power of the Algerian revolution, Qaid Salah first forced Bouteflike to abdicate, then moved against his erstwhile partners, staged a widespread series of judicial attacks on many of the notorious figures of the old regime, had Said Bouteflika and many prominent businessmen thrown into jail, all the while trying to woo the mass movement. He also established a body for dialogue and negotiations, composed mostly of people who had collaborated with the ancien regime, interspersed with some popular but only symbolic figures from within the masses, supposedly in order to consult the entire gamut of organisations and people who led the Hirak, i.e. the revolutionary movement, with a view to find an equitable solution to the questions put on the agenda by the revolution. This cunning method of absorbing and assimilating the movement was topped by the recommendation, by that body, of the formation of a new electoral authority in place of the earlier, totally discredited electoral organ, and the holding of presidential elections before 2019 was out, a recommendation that, strange coincidence, happened to be exactly identical with the preference disclosed by Qaid Salah at the same moment. To add insult to injury, the five candidates permitted to run were all dignitaries of the ancien régime, two of them prime ministers under Bouteflika and three of them cabinet ministers.

The Hirak rejected this whole scheme in toto (see our http://redmed.org/article/algeria-brink-revolution-systeme-degage).The movement acted as one on election day. In more ordinary times, it would have been the most normal thing to expect the usual “useful voting” argument: “We are so strong that if the Hirak were to put forth a candidate, he or she would be sure to win the election. Moreover, their vote will be divided among the five, so we will definitely win.” And it would no doubt make a lot of headway in the masses. But under the revolutionary circumstances, the masses did not budge an inch. For they knew that with the establishment of the ancien régime intact, with Qaid Salah, the head of the military, wielding so much power, a president of the republic in office would simply be a hostage of the “gangsters” (the appellation used by the Hirak for those who hold the levers of power). This is a consciousness of a very high calibre, as every revolutionary who has tried to persuade the masses at large to adopt somewhat radical electoral policies under ordinary circumstances grudgingly knows. The position adopted by the Hirak, in its totality to the best of our knowledge, was impressive and has acted as a crosscheck, confirming the veracity of our assessment of the ten-month uprising as a revolution.

This does not mean that the Algerian revolution is marching to victory on a broad and unfettered highway. Far from it. The very heterogeneous leadership of the movement is captive to the erroneous ideological conceptions resulting from the disillusions of the 20th century. The political parties that could have been expected to show the way to victory to the masses in their revolutionary zeal are themselves lost in confusion and disorientation. And theancien régime is surely ready to quash the movement in blood should that prove to be necessary, regarding which option the Hirak is not prepared in the least, pacifist illusions having taken the upper hand as in other countries in revolutionary ebullition at present.

Unless a clearheaded leadership armed with the Marxist methodology comes out of the mass movement, the Algerian revolution faces a future with a plethora of tricks and traps.

Here is the opening sentence of the article you are about to finish reading: “The Algerians went to the polls for their presidential elections on the same day as the British.” We did not write that sentence superfluously. We wish to finish the article by pointing out that leftists all around the world, in particular those from the imperialist countries, ranging from the spokespeople of her majesty’s left all the way to the self-styled revolutionaries of the imperialist world that call themselves Trotskyists, with possible exceptions, concentrated all their attention on the British elections and devoted little, if any, to the Algerian presidential election.

The neglect of the Algerian election by leftists is a grave sign of the loss of horizon for these currents, whoever they may be.

In effect, the holding of these two elections on the same day is manna from heaven for intelligent revolutionaries. It superposes and highlights the two decisive tendencies of our time. The British elections were of course very important, but the left thought so for the wrong reasons. It was not that Jeremy Corbyn’s win would make a great difference to the plight of the people. He would have been a hostage to the capitalist order of Britain and Europe as much as a Hirak candidate would have been to the Algerian establishment. No, in their essence, the British elections constitute a dire omen regarding the acceleration of the proto-fascist menace that is rising under our very eyes, thanks to the total devotion of a great part of the left to pro-EU liberalism and identity politics. (See our http://redmed.org/article/inglorious-end-jeremy-corbyn-prevaricator.) Whether Boris Johnson can himself be considered a proto-fascist is irrelevant here. The Conservative Party has not yet been transformed into a proto-fascist party. It is for the same reason that we have called Donald Trump, patron of Boris Johnson, a “loose cannon fascist”.

The Algerian presidential election is also of momentous importance, but for another reason. It was one of the clearest testing grounds of the resolution of the masses to accomplish their revolution and they passed the test comfortably. The series of revolutions that are taking place now in the Arab world (chronologically ordered, Sudan, Algeria, Iraq, and Lebanon) and the series of uprisings in Latin America (chronologically ordered, Haiti, Ecuador, Chile, Columbia, and the dual-natured Bolivia), with Iran waiting in the wings in the Middle East, are the antidote to the proto-fascist menace rising and rising in the horizon.

Imperialist ideology does not only blind its own ideologues. It also darkens the horizons of the left, unless informed by Marxism and, permit us to declare it loud and clear, Leninism.