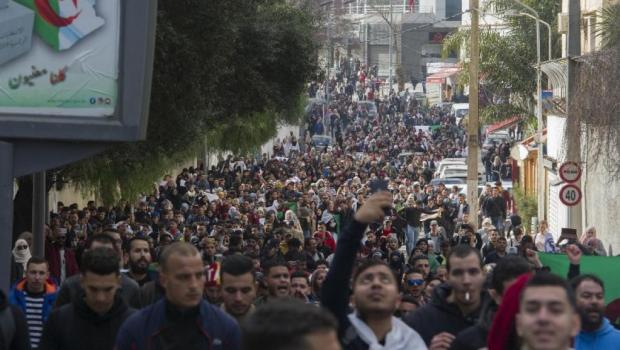 In an article on Sudan published on RedMed exactly a week ago (http://redmed.org/article/sudan-revolution), we wrote the following on the probable impact of the revolutionary developments in that country on the rest of the Arab world:

A victory, even if partial, of the masses in Sudan will, in all probability, provoke similar urges in other Arab countries. It would first have an impact on those countries already in ebullition, the ones we have already mentioned. But the ultimate moment of truth will come when the northern neighbour of Sudan, the giant of the Arab world, Egypt undergoes the same kind of effect. So the Arab revolution is far from dead, if such is the case.

We were doubly wrong. First, the impact did not have to wait for the victory of the masses in Sudan. Secondly, it manifested itself not in the “countries already in ebullition”, i.e. Iraq, Jordan or Tunisia, as well as the non-Arab country of Iran, but in the one country which the Arab revolution of 2011-2013 bypassed almost totally, that is Algeria.

On 1st March, some hundreds of people started to march immediately after leaving the mosque in the wake of the Friday prayer, chanting against the candidacy of the incumbent president of the republic Aziz Bouteflika for a fifth time after 20 years in power, and in the wink of an eye were joined by thousands and later tens of thousands. The marches and protests continued on Saturday and Sunday, swelling to hundreds of thousands of demonstrators, according to the reports on international bourgeois mainstream media. Sunday even saw a demonstration late into the night. Considering that it is forbidden to demonstrate in the capital Algiers at all times (elsewhere, apparently, it is only permitted on Wednesdays) and that no night time rallies have been held in that city for at least two decades, the size of the movement is phenomenal.

Our Argentine comrade Pablo Heller titled a book in which he studied the economic and political situation of the capitalist world after the collapse of Lehman Brothers in 2008 El capitalismo zombi. Apparently, the most adequate form of state for that zombie capitalism is to be found not in the imperialist centres of the world (which themselves are maturing in that direction), but in a country subjugated to imperialism (despite a heroic and victorious war and revolution against the colonial power France between 1954 and 1962). The proximate cause of the gigantic demonstrations that have overtaken Algeria is in fact the following: The Algerian population have not seen anything of the incumbent president (82 years old) for the last several years. In fact, he rarely appeared in public since he had a stroke in 2013, which condemned him to live on a wheelchair. He is now said to be in Switzerland for health reasons, whereas according to Algerian law he had to present himself to the Constitutional Council in person until yesterday, which was the last day of registration to pose his candidacy for the elections of 18 April. His deposition was made, in absolute disregard for the law, by his campaign manager.

As some Algerians say, the man may well be dead for all we know! Algeria is a zombie state with a quasi-dead president!

The reason is clear for everyone. Despite its revolution, which was not solely anti-colonial, but threw up radical forms of property in land and the urban economy, this state has become, over the decades, a rentier-state like many other Arab states. A widespread network of corruption then took hold among the officer cast, politically the most powerful actor in society, as well as the civilian bureaucracy and an up-and-rising bourgeoisie. Together, they have been supporting the FLN (Front de Libération Nationale-National Liberation Front), the leading organisation of the war and revolution against France, which therefore has remained in power ever since triumph of the revolution (despite a tragic civil war against fundamentalist Islamists in the 1990s, the so-called “bloody decade”). Being one of the last remaining heroes of the war, Bouteflika is a convenient figure, or so this coalition thought, to present to the masses, while they themselves, hiding behind his glory, continued to fill their coffers.

But obviously, they made a terrible mistake in calculation. The half-dead president proved to be the Achilles’ heel of the system of domination of the ruling classes and was the channel through which the zombie nature of the state revealed itself to the eyes of the masses.

Not only is the state system or regime a zombie, but the method of integrating the large masses is also at a dead-end. Algeria, like neighbouring Libya as well, hushed the reaction of the masses by some public expenditure on certain services. The country is incomparably more modern in its overall world view and lifestyle than the Gulf states. However, all this has now come to an end when oil prices tumbled in recent years. The Algerian economy is in a dire crisis. This leads, among the youth, to widespread abuse of drugs and fatal attempts at reaching the coasts of France in order to make a living, a youth that constitutes an immense part of the population with 50 per cent below 30 years of age. So this is also a national crisis that is also the direct product of the Third Great Depression.

We cannot foresee from afar the possible resilience of the mass movement. After two Fridays of mass protests, another demonstration is being prepared for Friday, the 8th of March. The coincidence with the International Working Women’s Day can only enhance the participation. Bouteflika having submitted his candidacy formally, we do not think things will calm down easily, unless internal contradictions within the ruling bloc lead to the discovery of a solution that would disqualify him from running in the elections (his failure to appear before the Constitutional Council may be a good excuse). We tend to think that the target of the mass movement has now gone beyond Bouteflika to become the regime at large. This will feed the dynamics of the movement and well may turn the popular uprising to a revolution. It should not be forgotten that Algeria has long had parties that claim allegiance to revolutionary Marxism, i.e. to the Fourth International. This will be their acid test as well.

The domino effect in the Arab world will probably now be amplified. We can expect other countries to be inspired by what is happening in Algeria and, of course, Sudan.

Finally, it is with great delight that we witness demonstrations in France, where there is a very sizable migrant population, whose sons and daughters (called, together with other Arabs of North African origin, les beurs in popular parlance) may probably join the fray on a large scale. This is something that we had foreseen in the first round of the Arab revolution (2011-2013), but which had not materialised to our chagrin. Coinciding with the social unrest personified, first and foremost, by the gilets jaunes movement in France, it may feed into a higher level of struggles. If this materializes, that development will be salutary for the gilets jaunes movement as well, since that movement is very perceptibly confined to the white autochthonous population of the country.

Lastly, need we remind the readers of RedMed, after all we have written on the topic (see, for instance, our http://redmed.org/article/2018-year-resurgence-third-wave-world-revolution), that Algeria has joined the ranks of the countries that point markedly to a resurgence of the revolutionary character of our period?