The 6D What did it mean? And now what? 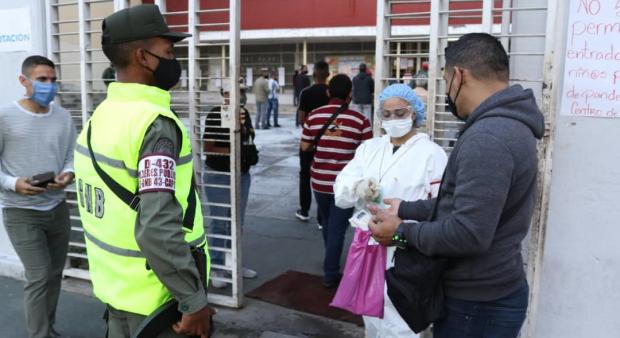 This article by our Venezuelan comrades of Opción Obrera was written immediately after the elections in Venezuela on 6th December, but was delayed due to the translation process.

The fact itself, the holding of the parliamentary elections on the scheduled date, was an expression of sovereignty[1], regardless of the general role of the parliament, or specifically, regarding the performance that the elected deputies will have after their election. On the other hand, both, who voted and those who did not vote, have nothing to eat. Thus, going to vote does not solve the hunger to which we are subjected.

Furthermore, the advantage and arbitrariness on the side of the government’s campaign over a faded opposition were also noticeable, as it always has been, not only with Chávez but in any other election before him, with AD and Copey parties when they were in the power. However, the international coercion to prevent these elections was the main feature of this conjuncture, which goes on by the right-wing opposition and its allies, especially the US government and the EU., in the way of a military sector coup, in the face of the extreme crisis that the country suffers in all areas. Even the distant Japan spoke out, against the electoral results.

The presence was noticeable despite the pandemic, the lockdown, the displaced who remained far from the polling place, and other perhaps greater circumstances such as chasing after gas, gasoline, lack of transportation.

On the other hand, the abstention of 70% indicates that a majority of the population is fed up with the government's call to vote for its candidates, but does not believe either in the mermaid songs of the right-wing opposition, which does not manage to mobilize the people even in this situation of extreme scarcity. The so-called sectors of the left have no convening power on workers, some of them because are still reluctant to detach themselves from the government, or even from the APR, the others, the abstentionists are supporters of the right-wing opposition, who attend or call for workers' mobilizations, calling out Maduro without proposing a workers' government as an alternative.

Venezuela, its political position in Latin America and beyond

Facts are objective conditions, when they are reflected in the minds, in the subjects and become actions, they become objective. Venezuelans come from several historical feats, saving Chávez from disaster in the events ranging from the right-wing coup that removed them in April 2002, the defeat of the two-month-long oil and industrial lockout, with the support of the entire union bureaucracy that dominated for 40 years, until the recall promoted by the right itself, all with the greatest support from the US, then there have been hard years of economic ruin, after the fall in oil prices. It is from there, that the current situation, the absence of a combative leadership, and in that sense a concrete proposal is necessary in order to reactivate the struggles.

The fact that more than 50 countries do not recognize the government of Venezuela, something inconceivable, only after a social revolution such as in the USSR or Cuba, has happened, with its different nuances. Venezuela negotiates, especially gold for gasoline with Iran, a country also subjected to thefts and brutal economic blockades by the US and Europe, and trades with Cuba, receiving in exchange advice and education and healthcare personnel. In the tough fight for the world market, where the US puts pressure on the EU for trade relations with China, or gas with Russia, these two countries, together with Turkey, evade the commercial and financial embargo suffered by Venezuela, including some military support before the criminal siege to which it is subjected, this does not exempt the looting of resources by the governments of those countries together with the civic-military government of Venezuela.

Maduro, tries to get out of the impasse by giving facilities to importing merchants, privatizing companies, and making more fun of workers, especially public employees, however, due to his origin, to become a valid speaker of imperialism in the country, he would have to become the opposite, burying nationalism but that is impossible, the economic crisis continually aggravating, prevents him from making that pass, the right-wing opposition also has no possibility of doing something, only stock market speculation does not allow to make a profit, the general economic crisis is getting worse with the pandemic.

Therefore, the only viable, real alternative is the workers, together with the immense resources that the country has and that the imperialism wants for themselves, especially the oil belt, with heavy oil to produce diesel, light, and heavy oil. There is obviously a reason why, despite the thefts and sanctions, the Trump administration yet another time, extends concessions to Chevron, Schlumberger, Halliburton, Baker Hughes, and Weatherford to exploit oil here in Venezuela, and Maduro’s government also willingly allows it.

Opción Obrera has said that the Chavismo is capitalism's last resort. Since 1999, it has served to avoid a revolutionary process in Venezuela, to divert the momentum of the masses since they rose up in 1989 against the application by Carlos Andrés Pérez of an IMF recipe. The military coups of February and November 1992, as a consequence or a response to the exhaustion of the governments that originated after the fall of the Pérez Jiménez dictatorship, forged at beginning of the century, a national-populist cycle, which without breaking bourgeois institutions would have to fail.

The Madurism comes from there, and it must be overcome, but it is not by gravitating around the right-wing opposition, or by helping the government to straighten it out, as the entire so-called left does. Some demand compliance of the constitution in terms of wages, when the economic crisis that plagues the world and especially Venezuela, has no way out within capitalism. In any case, the last action within this society would be to debate a new constitution, through a Sovereign Constituent Assembly called to respond to the social, political and economic crisis, which can only be undertaken by a workers' government.

We have proposed a solution for the workers, before the elections:

Salary and pensions equal to the basic basket.

General and immediate wage increase for all workers

A sliding scale of working hours, based on employing all workers.

Rights for the Workers

Repeal of memorandum 2792. Recognition of unions and collective agreements.

Trade union autonomy, not to the interference of the National Electoral Council (CNE) or the Registry of Trade Union Organizations (RENOS).

Freedom and ending of processes of imprisoned workers and peasants.

No to the criminalization of labor and social protest.

Nationalization of Banking and Foreign Trade, all the money there is to plan and reactivate production according to the interests of the workers, it cannot continue to benefit capitalism. The import is also only in that sense, not to benefit the importing groups.

Reproduce for foreign companies in the country, the same treatment that their respective governments make against Venezuela. Faced with sanctions, nationalization without payment of large foreign capital

Repeal of the Anti-Blockade Law.

Democratic freedoms and defense of the country

Prison for the coup plotters and agents of imperialism.

Down with secret diplomacy, a publication of all negotiations with all the details.

No agreement with imperialism

Elimination of all repressive bodies.

[1]a trait does not mean having sovereignty