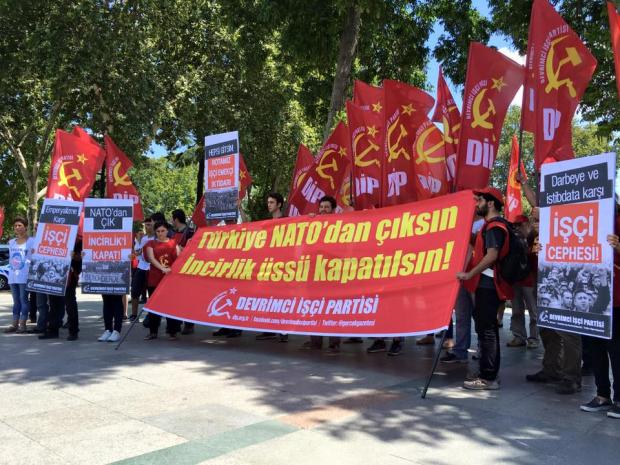 The Revolutionary Workers' Party held its 4th Congress and renewed its aim of deploying its forces within the heart of the working class in order to defeat imperialism and the despotism on the way of construction in Turkey. The congress started with a commemoration of comrades Atlen Yıldırım -a Central Committee member- and Sevda Alyakut - a vanguard revolutionary woman factory worker- for their recent losses. Revolutionary messages of CRFI sections EEK (Greece), PO (Argentina), PCL (Italy) and MTL (Finland) were read during the congress as well as a mutual solidarity message from AMO (Association of Marxist Organizations) and RPK (Russian Party of Communists) from Russia.

The congress declared the year 2017 the ”Year of the October Revolution” in reference to the 100th anniversary of the great leap that commenced the age of proletarian revolutions. 2017 is also the 100th anniversary of the infamous Balfour Declaration that marks the further enslavement of the Palestinian people and DIP expressed its resolve for struggle until the Zionist entity of Israel is completely destroyed in favor of a single state for Arab and Jew. (The texts of both resolutions are provided below as appendices to this piece.)

Based on the analysis of the world capitalist crisis, war and revolutionary dynamics altogether, the Revolutionary Workers' Party emphasized with the resolutions passed during its congress that the future of humanity lies in the defeat of imperialism, in revolution and in socialism, not in the so-called democratic values of the imperialist world or in nationalist dead-ends or reformist utopias.

DIP had previously determined that the financial crash beginning in 2008 was a product and the start of an economic depression. The direct result of characterizing the situation as a depression was indicating the lack of capability of capitalism as a system and as a whole to control the dynamics giving rise to deep social and political upheavals. Racism and fascism on the rise in America, Europe and in other parts of the world as well as revolutionary struggles and peoples’ rebellions should be viewed as an output of that depression. This means that revolutionary dynamics dialectically lie in the opposite poles of the crisis, war and every shade of reactionary forces growing apace.

The congress made firm that the prologue of a possible world war could be a war in the Middle East and suggested fighting against imperialism and Sunni-Shia sectarianism instead of ineffective pacifist claims against such a war. The resolution also points to the mistake of equalizing the bourgeois regimes of Russia and China to the US and European imperialisms. An uncompromising struggle against the imperialist forces that are paying a great and continuous effort to surround and isolate Russia and China without assigning any progressive values to the capitalist national leaderships of those countries is necessary. The 4th Congress also introduced a similar approach in Syria and emphasized the importance of fighting imperialism, Zionism and sectarianism without politically supporting the Assad regime.

Arouse the working class against despotism!

Regarding Turkey, the congress reiterated the decision taken by the 3rd Congress of 2015 for implanting the party within the working class, in particular in factories, shipyards, mines etc., further deepening this orientation and determining new targets in the light of the achievements already made in establishing vanguard worker nuclei in a series of workplaces and a network of workers’ branches in certain cities. DIP, it was underlined, will continue pursuing its organizational priorities of setting up and consolidating branches with working class presence, thus becoming a workers’ party not only in its programme, ideology and overall orientation, but in terms of its class composition and day-to-day practice as well.

The 4th Congress connected this orientation to the line it will pursue in the coming period. The resolution on Turkey engaged in a broad assessment of the overall situation in the country, stressing the positive elements as well as the weaknesses of the mass movement, without any concession to the pessimism fashionable in the ranks of the rest of the left. It further pointed to the blatant contradictions within the power structure in the country and the fundamental isolation suffered by the AKP government at the international level.

Noting the manifold symptoms of the involvement in, or at least the benevolent silence of imperialist powers, to start with the United States, during the 15 July 2016 failed coup attempt, the congress resolved to make an anti-imperialist orientation a major plank of DIP policy in the coming period, not only because of international developments but also with respect to domestic developments as well.

For the World Party of Socialist Revolution

In this sense, the congress emphasized the vital significance of the re-foundation of the Fourth International as a world party and put forward that solving the crisis of international leadership of the proletariat is an urgent task. And in this perspective, DIP also adopted the struggle for Turkey's exit from NATO as well as the closure of the imperialist bases beginning with the Incirlik Base used as the headquarters of imperialist intervention in the Middle East. DIP sees that anti-imperialist work as a vital part of the struggle for the world revolution. As revolutionary Marxists, militants of DIP view every move that weakens imperialism as a contribution to the revolutionary struggles both within the region and on the other parts of the world.

Appendix 1: The 1917 October Revolution is One Hundred Years Old!

The modern era has brought humanity, with the Industrial Revolution at the end of the 18th century, a gigantic leap in the spheres of science, technology and the productive forces. But the socio-economic structure providing this leap, the capitalist mode of production, was at the same time making unemployment, misery, exploitation and war inescapable facts of life. The October Revolution, by putting an end to the capitalist social order, brought before humanity for the first time in history a social order where workers and toilers would actually assume power and where classes would disappear over time.

The Revolutionary Workers’ Party (DIP) is a party that finds its perspective of history, the verification of the Marxist programme and theory, and its own programmatic direction, strategy and tactics in this historical source. DIP is a party tackling to save the future of humanity in this geography, in the Middle East and in the world by taking the road the workers and the peasant masses, their soviets, the main political apparatus of the proletariat–the Bolshevik Party-, and its political leaders Lenin and Trotsky took in the October Revolution.

Most of all, DIP shall explain to all the struggling sectors of the Turkish working class that the October Revolution is not a Russian national revolution, but the greatest breakthrough on the way to the emancipation of the proletariat, the only force that can be the agency of the liberation of humanity from exploitation, misery and war in the modern era. DIP shall underline that struggles that made possible the liberation of all the oppressed peoples from imperialist domination, including the National Struggle of 1919-1923 in Turkey, achieved their successes by drawing strength from the October Revolution and its product, the Soviet state. DIP shall stress that throughout the 20th century, workers and peasants of other countries (China, Eastern Europe, Cuba, Vietnam, etc.) put an end to the rule of capitalism following the footsteps of the October Revolution. In short, DIP shall show that the October Revolution drove throughout the 20th century the whole world to a favorable trajectory, to begin with the conditions of existence of proletariat. While doing this, DIP shall in particular emphasize that the October Revolution carries an essence neither belonging to nor uniquely fit to the country where it first took the stage or the other countries that followed it, or to the social, religious, and ethnic structures and the cultures of those countries, but that both the October Revolution and Marxism, its guide, are Turkish and Kurdish as much as they are Russian, Arabic and Iranian as much as they are Chinese, Vietnamese or Cuban.

Likewise, DIP shall explain that the disintegration of the Soviet state, a state that is the product of the October Revolution, is a development to the detriment of the working class and the oppressed of the world. Finally, DIP shall insist that such disintegration was not inevitable, that the bureaucracy that paved the way to the collapse of the Soviet state was a product of the special conditions of 20th century socialism, and that in the future, a socialism where the bureaucracy will not wield power over the working class and a new society alternative to capitalism will be possible.

By doing so, the Revolutionary Workers’ Party will have served its historical task, the task of reuniting the working class of this region and the world with the tradition of the October Revolution.

Appendix 2: Fight for a secular, democratic, socialist Palestine on the 100th anniversary of the Balfour Declaration!

The year 2017 is the 100th anniversary of the beginning of the enslavement of the Palestinian people, by first British imperialism and then Zionism, and this after years of nourishing the Ottomans with their taxes. On 2 November 1917, the Foreign Minister of Britain at the time, with the ill-famed Balfour Declaration named after him, promised the Zionists “a national home in Palestine”. The Zionists, who gradually bought out the lands of Palestine, which stayed from the end of the First World War until 1948 under a British mandate, founded the state of Israel in that year by evicting the Palestinian people from the land they had lived on for thousands of years and extended the territory of the newly established state of Israel through wars, thus condemning the Palestinian people to slavery. One hundred years after the Balfour Declaration, Palestine is still living under the yoke of an illegitimate, racist, fundamentalist, and apartheid-style colonialist state.

The Revolutionary Workers’ Party (DIP) sees the enslavement of Palestine as the worst atrocity a people can be subjected to. Further, the Palestine question is the naked expression of the oppression established by imperialism in southwest Asia and North Africa, populated by a majority of Muslims. The illegitimate Zionist state, notwithstanding its own distinctive interests, is nothing but a wedge stabbed by imperialism in the bosom of the lands called the “Middle East”. Finally, for the Revolutionary Workers’ Party, Palestine is amongst the most striking examples of failed pipe dreams of liberation from national oppression through cooperation with imperialism. Arab collaborators, whilst carrying the rightful aspirations of the Arab people for national liberation from the Ottoman Empire to the level of military alliance with imperialism during the First World War, were promising liberty to the Palestinian people. One hundred years on, Palestine is still a colony!

On the 100th anniversary of the Balfour Declaration, the Revolutionary Workers’ Party shall make all that it can to bring forward the Palestinian people’s cause of liberation to the agenda of  Turkey, to explain the truth that the state of Israel is an illegitimate political entity, to expose the alliance between the Justice and Development Party government and Israel, to position Turkey against Zionism as well as imperialism, to make clear that the Palestinian cause can only be resolved on the basis of a secular, democratic Palestine on the historic territory of Palestine, a state that will be a member of a Socialist Federation of Middle East- not by commitment to a [Neo] Ottoman like foreign centre on the basis of the exploitation of its richness, nor  through a “two-state solution” accepted by the collaborationist Palestinian Authority.

DIP shall also aim to be involved in various international platforms with all the forces struggling with the perspective of a real liberation to Palestine, socialist organizations of the Palestinian people being foremost among these. In this direction, DIP shall further keenly continue the efforts it has been undertaking for many years in the bosom of BDS Turkey (the Boycott, Divestment and Sanctions Movement).