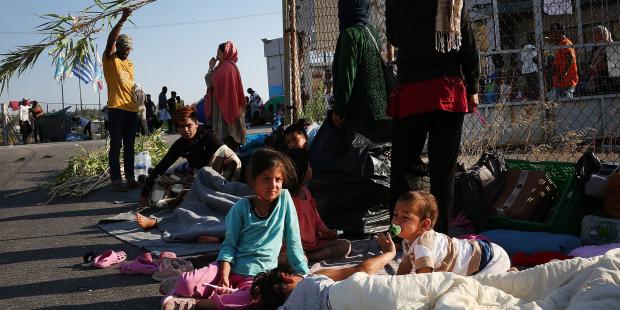 Greece, where the borders of EU are, is also the entrance of thousands of war refugees from the third world. Among families with small children and babies, there are around 400 children with no family at all, no hope and no future.

The european countries, among them Finland, are obligated to provide asylum to these children, if they still want to call themselves civilized. It is about small kids, who at the age of 10 years old show suicidal tendencies among other psychological reactions. The main reason for these reactions is the post-traumatic shock about what they had been through during the war in their countries and also the treatment they had into the refugee camp of Moria.

Last week Moria, in Lesbos island, was totally burnt twice! The plan of the Greek conservative government and its fascist supporters, is to build(=pitch tents) for creating a new hot spot in another place at the same island, or even “better” to send all the refugees to an abandoned island, completely deserted of people and with no shelter, somewhere in Aegean sea, a place where dictators used to send to, torture and murder communists from 1950’s for almost 30 years, far away from the civilized eyes of the “legal” population of Greece and Europe, in general.

Lately, when European Commissioner for Home Affairs Ylva Johanson was asked about relocating refugees from hot spots into the interior of Europe, she answered that Greece should apply for that.

That means that the greek government will never do it, because after a research of European anti-fraud agency about the financial help that Greece is taking from the EU, it came up that only 30% of this money is going for developing refugee’s lives and the rest of it is totally unknown where has been spent. Until now Greece has taken from EU 1690 million and this year will take 700 million euros more.

The reaction of Finland was to declare that it will take care of 11 out of these 400 unaccompanied children. These kids are not asking for charity, but for a new homeland, proper education and loving families. It is absolutely insane and indescent for a child-centered country like Finland to offer only for 11 kids the right to start a new life! Is it all that this country can do for them?

Abolish all refugee-concentration camps! We demand asylum for all war refugees! We demand the transportation of these people to countries that they wish to start a new life!

Give to our children the opportunities that all children of planet Earth deserve!

Be silent only when children are sleeping not when they are in pain!