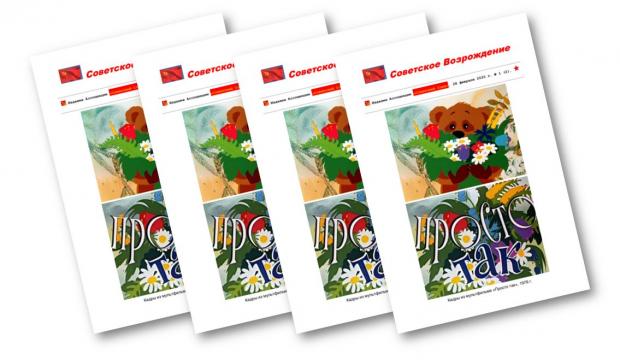 We are proud to present to our readers Issue No. 1 for 2020 of Sovetskoe Vozrozhdenie. Бюллетень Ассоциации «Советский Союз» or inEnglish Soviet Renaissance. Bulletin of the Association “Soviet Union”. This is the second issue to appear on RedMed. The very first issue of the journal was published in December 2019 and also posted on RedMed . (Click here)

Table of Contents (in English):

"Soviet Renaissance" - always on the websites of RedMed and Russian Party of Communists - p. 2

L. Maryus. Features of the proletarian revolution of 1918 in Lithuania - p. 13

Victor Fedorovich Isaychikov. Were Russian revolutions of the first third of the 20th century proletarian? - p. 16

Robert B. Reich. Trump is Living in an Alternate America – p. 66

Levent Dölek. The struggle of the metalworkers of Turkey for bread and freedom: Obstacles, promises, and prospects – p. 68

Alexander Mitrofanovich Obolensky. Popular "no" to raising the retirement age! (The law has been adopted, but contrary to the opinion of the people, and the people now have the right and can cancel it!) - p. 87