Odessa: the last warning Stop the Nazis and imperialist intervention! For a united, independent, socialist Ukraine! Call for international solidarity 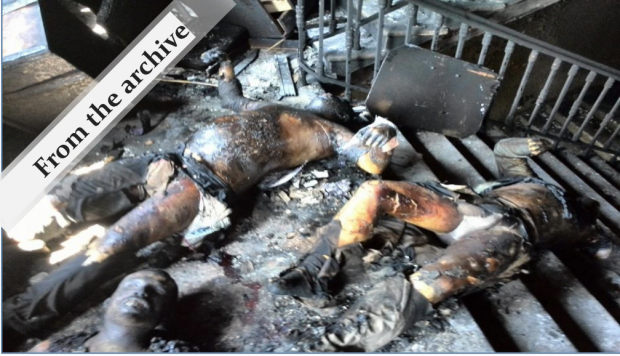 The immediate background to today's war was the change of regime Ukraine went through in the Maidan events of 2014. The importance, even the existence, of fascists and their presence both at Maidan and later in the setup of the new Ukrainian regime was almost denied by most left-wing international groups. Three months after the end of the Maidan events,  a fascist band burned and killed dozens of trade unionists and leftists in the Union House of Odessa. The article below describes the events and reaches certain conclusions. Today also the fascists are very active in Ukraine. We are publishing the article below, originally published on RedMed on 9 May 2014, one more time in order to warn our readers on what kind of "revolution" Maidan was.

Every May the 9th, after the end of World War II, humanity used to celebrate the defeat of fascism. But after the Black Friday of May the 2nd and the massacre in Odessa, humanity remains shocked to see again Nazi storm troopers burning alive defenseless civilians, arresting and killing all those who tried to escape, singing the national anthem before their corpses.

Let us transform this terrible shock into decisive action!

Any silence is complicity! Even worse, it is a crime. We have to tell loud and clear the truth about the pogrom in Odessa, to defeat the Big Lie already spread by the perpetrators and instigators of the crime, the Nazis of the Right Sector and of Svoboda, their partners in the illegitimate Kiev “government” of pro-Western oligarchs, and above all the imperialist centers in the United States and the European Union assisted by the “mainstream” mass media.

Undoubtedly, when a society in a failed transition like Ukraine implodes and its economy collapses, the situation is complex and full of contradictions, which cannot be dealt with in black and white over-simplifications. Nevertheless, only those who are guilty could try to present the black as white, the victims as criminals, and the Odessa citizens assassinated, in the most atrocious way, by real Nazis of the Right Sector as “pro-Russian fascists or Russian agents”.

This is exactly what the Western Press and TV propaganda tries to do presenting those burned alive as “pro-Russian separatists and nationalists” and the Right Sector storm troopers of May the 2nd as “pro-Ukrainian activists” (see for example the article in the International Herald Tribune of May 5, 2014). Now, the same “citizen activists” according to the Minister of Internal Affairs in Kiev, will replace the local police to impose “law and order”, in other words to terrorize the Odessa population subjugating it to the dictatorship of the masters of Kiev. Already, doctors who tried to help the victims of the pogrom were treated by the “pro-Ukrainian activists” as “dirty Jews”. They were manifesting once more the notorious anti-Semitism of the Banderovites in power, which is particularly vicious against a city like Odessa that used to be a traditional center of Jewish culture honored by the immortal pen of an Isaac Babel. The massacre in Odessa has rightly revived sinister memories of the 1941 pogrom of Jews in Lviv by the Stepan Bandera gangs.

The Odessa pogrom is insolubly tied to the siege of Sloviansk, the executions in Kramatorsk and other cities, the rapid escalation of the military aggression by the Kiev forces using helicopters, tanks, special troops, under the guidance of the US “specialists” in terror warfare against the working class and popular rebellion in Eastern and Southern Ukraine.

Even the Western Press that attempts to depict the rebellion as the action of “small groups of pro-Russian separatists and of disguised Russian soldiers” cannot but admit that this action has the support of the local population. The working class character of the revolt is clearly shown in the strike launched on April 23 by the miners of the Donbass against the owner of the mines the oligarch Akhmetov, the richest man in Ukraine, former supporter of Yanukovitch, and key figure for his removal. The same miners have addressed themselves to the miners of the European Union asking for solidarity, in the spirit of proletarian internationalism. This region is the industrial heartland of the country and the target for the offensive of the foreign capital following the program of social cannibalism tied to the IMF loan.

The working people in Eastern and Southern Ukraine do not defend only their language or national-cultural rights from the ethnic hatred and genocidal plans of the Banderovites in Kiev. The social question is at the center, despite all the noises made by right wing Russian nationalists.

It is well known that not only the Ukrainian oligarchs, but also the Russian oligarchs with invested interests in Eastern Ukraine oppose the rebellion and demand its repression.

The truth is that the population in Eastern Ukraine suffers rather from the inaction of Putin's Russia than from its action. The popular militias in Donetsk vainly called for arms. They are armed by the old weaponry of the 1980s taken by the local insurgents from the Ukrainian armed forces and police. The Kremlin subordinates everything to its secret diplomacy, bargaining behind the scenes with the US and Germany. The Geneva agreement of April 17 was, above all, an attempt to politically disarm the rebellion in Donetsk, as we had stressed in our Appeal of April 18. It was a dangerous farce that failed miserably turning into the current tragedy.

We repeat: neither the Kremlin nor the oligarchs but the international working class is the real class ally of the Ukrainian workers.

The Odessa pogrom is the last warning not only for the tragedy that falls upon the entire people of Ukraine, both in the Eastern and the Western part of the country, but furthermore, for a more vast and terrible tragedy involving the entire region, Europe and the world. It is reminiscent of the Kristallnacht, the “Crystal Night” that preceded in Nazi Germany the genocide of the Jewish people of Europe.

The “New Order” that the “activist citizens” of the Right Sector, according to the Ukrainian Minister of Internal Affairs, would like to impose involves not solely Odessa or the Eastern Ukraine but all Ukraine to be able to implement the draconian measures of the IMF and the EU. Furthermore, it involves all the former Soviet space, the target for re-colonization by the US, NATO, and EU imperialists.

If we allow them to succeed in their plans, then not only Ukraine, or Russia, or Eastern Europe and the Balkans but Europe as a whole, the Middle East and the entire world will suffer a catastrophe. We have to stop them immediately!

Let us start by making this year's anniversary of the defeat of Fascism on May 9, an International day of mobilization of solidarity, denouncing the massacre perpetrated by the Nazis in Odessa. Let us organize for this purpose the picketing of the Ukrainian embassies and consulates all over the world, leafleting, holding meetings and demonstrations etc.

Let us put at the center of the political activity of all left and popular organizations and social movements, in every international and national forum, the implications of the Ukrainian tragedy tracing its connections with the actual specific situation in each country.

Let us break the complicity of silence, the torpor and inactivity that the official bureaucratized Left maintains, particularly in Western Europe, in relation to Ukraine, when it does not openly support the actions by “their own” imperialism. If we allow the Banderovites in Kiev to do what they like in Odessa, then we will allow tomorrow the same crime to be committed by the “Golden Dawn” in Greece, by Jobbik in Hungary or, even, by Marine Le Pen's National Front in France.

Let us systematically unmask all the lies of the mass media, propaganda and psy-ops of imperialism. The truth is concrete and revolutionary.

The fake elections of May 25 in Ukraine under a US/EU imposed dictatorial regime waging war against the people of the country have to be denounced and the electoral farce boycotted.

Both Ukrainian nationalism and Great Russian nationalism spread ethnic hatred, disintegration, national slavery and social disaster for the interests of the oligarchs and global capital, for the IMF, the EU, the US, and NATO.

The integrity and independence of Ukraine can be secured only if all oligarchs are expropriated under workers’ control without any compensation to these thieves and the entire economy and society is re-organized on a real, i.e. anti-bureaucratic, socialist basis.

The fake Verkhovna Rada should immediately be dissolved. Workers’ Councils should be formed everywhere and elect delegates to a new, real Verkhovna Rada to organize a national discussion of a new Constitution for a united, independent, socialist Ukraine ruled by the Councils of its workers and people and not by the gangsters at the pay of Washington, Berlin, or Brussels.

Death to fascism! Freedom and Peace to the people!
All power to the workers Councils!