We will not abandon Tahrir nor any other square of the world! 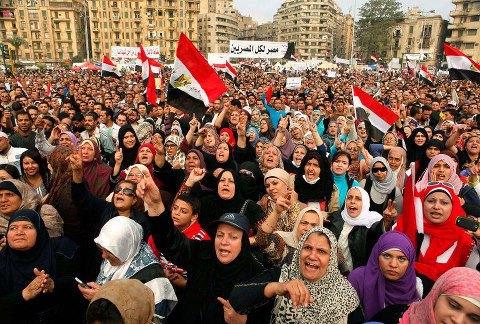 These attacks targeting women do not raise fear, they cultivate anger. Rather than abandoning the streets, Egyptian women have been organizing demonstrations for days. As women militants of the Revolutionary Workers’ Party (DIP), we salute the courage of the revolutionary women of Egypt. And we call women around the world to fight against sexual harassment and rape!

We will take the women, then the guys one by one…

A woman activist who was on Tahrir square to celebrate the anniversary of the Egyptian revolution of 25 January and to protest the Morsi regime explains that these words uttered by one of the assailants during the  group sexual harassment she was subjected to have been engraved forever in her mind.  No other words could make it clearer that the actual aim of these attacks, ever increasing in numbers, is to deter women from taking part in protests and exclude them from politics. In a nutshell, to tear them away from the revolution!

During the protests of 25th January 19 sexual harassment incidents were reported. It is not difficult to imagine that the number of attacks that went unreported would be much higher. These acts were extended from verbal abuse to physical harassment as women, regardless of their age, had their clothes torn, some of them were stabbed while others got raped. Considering the way the attacks were organised, assertions that this is the work of organized paid gangs seem to have valid grounds.

Although, the attacks on women have been on the rise recently, this is not the first time that such things have happened in Egypt. Our memory still recalls the violent scenes of a woman activist being dragged on the street half-naked by soldiers during the  demonstrations against the Supreme Council  of the Armed Forces some time after the fall of Mubarak. Furthermore, if we go back to 2005, similar sexual assaults were performed on the so-called Black Wednesday events, with the security forces standing by and watching. In spite of the fact that the Muslim Brotherhood reacted as well as the socialists at that time, now they are in power and bear the responsibility of stopping these attacks. In an effort to appease the reaction of the revolutionary women of Egypt, the ruling party has stated that a law was being drafted concerning sexual harassment. However, no tangible progress is in sight yet. Instead of tackling the problem itself, the Muslim Brotherhood invented an ingenious (!) solution for the problem of sexual harassment by establishing single-sex trains. The real problem has of course been bypassed.

According to a survey carried out several years ago by the Egyptian Centre for Women’s Rights, 4 out of 5 women have been sexually harassed, half of them being abused each and every day. In Egypt, a country in which abuses are a part of daily life, the rise of sexual harassment incidents has become a direct tool for political repression. At the places were demonstrations are held, some voluntary groups act in order to protect the potential victims against these assaults. After the events of 25 January, certain organisations including some socialist organizations and the National Salvation Front have announced that they will extend support to such voluntary groups.

These attacks targeting women do not raise fear, they cultivate anger. Rather than abandoning the streets, Egyptian women have been organizing demonstrations for days. One of these has been planned for today, 12 February, at 18:00 in front of parliament. However, this protest has already spread beyond the borders of Egypt. Today, in more than 20 countries, women will conduct internationally coordinated actions in front of Egyptian embassies and consulates.

As women militants of the Revolutionary Workers’ Party (DIP), we salute the courage of the revolutionary women of Egypt. And we call women around the world to fight against sexual harassment and rape!