Midterm elections in the US: a draw? 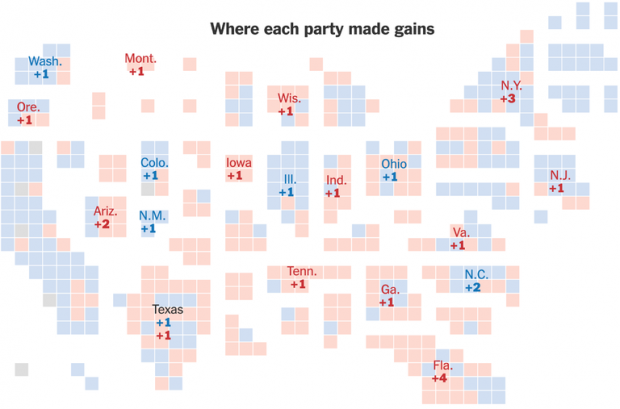 US midterm elections took place on Tuesday November 8th, 2022. Midterm elections determine one third of the Senate composition and the entirety of the House of Representatives, as well as state governors. The result of this year’s election frustrated the wishes and predictions of both great parties. Votes are still being counted, but it looks like the Senate will remain in Democratic control with a slim majority, and the House of Representatives will go over to the Republicans, also by a slight margin. However, the Republicans are disgruntled, since they had imagined that inflation coupled with Biden’s inconsistent policies would fetch them an overwhelming victory. Especially the former fascist president Donald Trump looks pretty upset over the fact that his candidates lost in important states like Pennsylvania.

Throughout the elections, the Republicans obsessed over inflation and rising crime rates in the cities, and the Democrats over the issues of democracy and abortion rights. Therefore, the election period came and went not with new promises but with the two parties blaming one another for systemic problems. All this time, the Democrats demonstrated a frightened defensiveness, and the Republicans an aggressive stance enhanced by their position as the opposition. The reason behind these attitudes is obvious. The Biden cabinet has been following a most contradictory course for the last two years to put down the fires the pandemic, the popular revolt, economic collapse, and finally the Ukrainian war have set ablaze. Biden appears to defend workers’ rights and defends the unions, only to follow this posture with breaking his promises to raise the minimum wage or forgive student debt. The Republicans had therefore hoped to take advantage of this inconsistent and indefensible course and raised their voices quite a few notches.

However, most Americans seem still to be captivated by the shock of January 6th. Battering Trump with a chain of legal accusations has come to be an important element of Democratic propaganda. Thus, even those people whose hearts do not beat for the Democrats might have refrained from voting for candidates whose names are directly associated with Trump. It looks as if we are witnessing an inverted picture of the 2020 elections. At that point, the right-wing Democrat Biden, who had fed on the swing to the left triggered by the pandemic despair and the popular revolt, had assumed the duty of absorbing the popular anger and channel it into the corridors of the system. Now, the more “moderate” Republicans seem to have assumed the same role from the opposite end of the spectrum.

Nonetheless, to derive from all this that the danger of fascism is gone, or that a middle-of-the-road line is solidly established, would be the purest parliamentary cretinism. Yes, not all Trump’s candidates won, and a seemingly more moderate Republican group emerged on top of the legislative. Biden is cheerful not because his party won, but because it didn’t lose as bad as he thought. The “red wave” the Republicans had hoped for did not materialize. Yet, the current political and economic situation renders any long-term centrist politics impossible. The American economy is struggling with high inflation rates for the first time in five decades. The war in Ukraine is going on seemingly endlessly, and the American government is doing everything in its power to fan its flames. Fascists keep organizing and winning victories both in the USA and internationally. It was as late as October 29th that a fascist attacked the Democratic House Speaker Nancy Pelosi’s house. The desperate working class is going over to fascism in the absence of a revolutionary alternative. To protect the status quo under these circumstances would only benefit the fascists in the future.

Let us back our diagnosis with some evidence. Some states on the East Coast go through midterm elections a bit early. In New Jersey, a state that had been under solid Democratic control up until that point, the Democrats won the gubernatorial election in 2021, but only with 51 against 49% of the votes (a mere 2% margin). The most remarkable aspect of the election was the fact that a Republican teamster beat the all-powerful Democratic Chair of the State Senate. We had said of the situation back then: “[T]he near debacle in New Jersey marks a qualitative turning point in this working-class shift. The Rust Belt states have been swing states for a long time, while New Jersey was a Democratic stronghold. While the unions have by and large collapsed in the Rust Belt, they still enjoy relatively high levels of membership and organization in the coasts. Therefore, the victory of Edward Durr as a unionized trucker marks a turning point. The Republicans have not only won enormous grounds, they are now carrying the fight into the heartland of the Democratic grip” (http://redmed.org/article/usa-post-putsch-growth-fascism). Now similar situations are emerging in generally Democratic states like Oregon and California.

J.D. Vance of Ohio, who had opposed Trump in 2016 but gradually shifted over to his side since 2020, literally wrote the book of all this. Vance’s book The Hillbilly Elegy can be read as a fascist manifesto, even if its author was not a Trumper back when it came out: Ohio’s white workers are the losers of the game, and therefore a “culture war” must be waged against the “liberal” (meaning “pro-social justice” in American political lingo) elite who speak of granting rights to minorities, immigrants, etc.! If Trump was asked to explain his own political program, he couldn’t have put it more eloquently!

There is a new fascist regroupment on the horizon. This Vance, whom we mentioned above, was elected as a senator from Ohio after a mass rally in which Trump himself spoke. Kevin McCarthy, who was a Trump ally between 2016 and 2020, defended the January 6th putsch at first, and backed down to save his seat, is now to become the Republican House Speaker. The pro-Democratic globalist press is full of stories that celebrate McCarthy’s victory as a score against Trump. However, McCarthy has proven himself as an arch-reactionary both in the four years of Trump’s tenure and since then with his actions. There is no reason to assume that bourgeois politicians of the most cowardly kind won’t patch up a rift that emerged during a crisis, or even that it was not a sham fight all along.

Trump must have been encouraged by this sight of regroupment, announced as he did on November 15th his bid for Presidency. True enough, his announcement proved much less enthusiastic than he had anticipated due to the partial draw. Nonetheless, it is also obvious that Trump has no intention to deviate from his fascist program or the course he has been following for six years. He called on American workers, farmers, firefighters, teachers, as well as the police, and declared war on the “Washington establishment” to make the US triumphant all over the world. He bragged about his “unprecedented successes” during his tenure of four years and blamed the interruption of these so-called successes on Covid-19, which he called the “China virus”. His message is clear: if we weren’t even more successful, it is only because we haven’t been able to bring China on its knees yet! The Biden government, which is provoking Russia and China through the proxies of Ukraine and Taiwan respectively, is following the same course that Trump would take.

The great danger of fascism is still at the door. It just did not win as big a victory as it had anticipated. It is futile to expect a response against fascism from the Democrats, who are dancing cheerfully because they did not lose as bad, and thereby declaring their own impotence. The solution is for the American working class, who is already in the fight in various sectors from education to auto through strikes, actions, and unionization drives to assume the leadership of all oppressed social sections.