Before the snap Greek elections on September 20 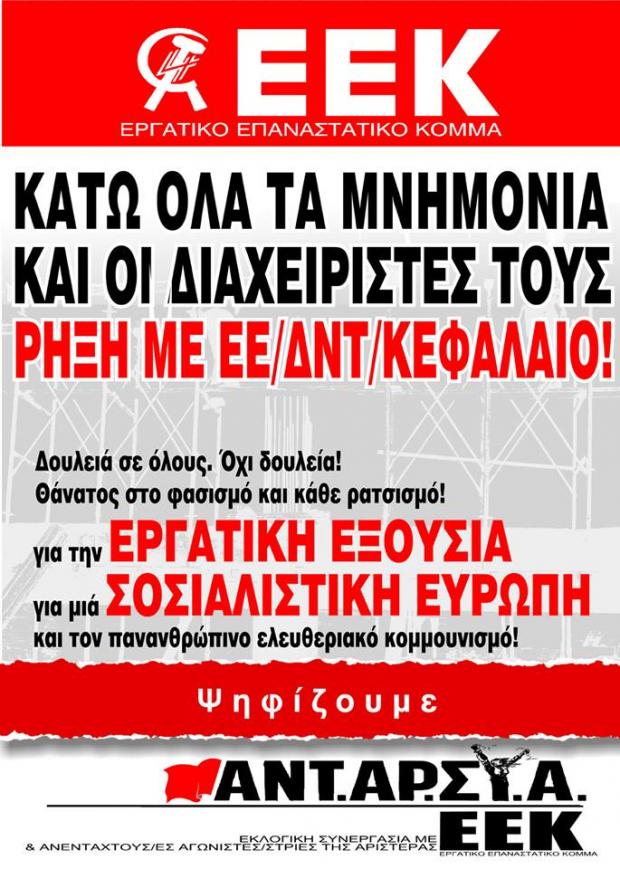 Only a few days remain  until the snap elections  on September 20 called  by  former prime minister Tsipras, after  the implosion and split of the ruling party Syriza that followed his capitulation  to the troika on July 12, and the vote of the third and worst “Memorandum” of austerity measures.

The Tsipras leadership of the remaining Syriza blames  the  faction of Left Platform led by Lafazanis, which   opposed the  Memorandum and split  with 25 Syriza deputies to form  “Popular Unity”, running now independently  in the elections . It is not true at all. There was and  continues a generalized shock among the Greek masses, a deep disappointment, and a popular wrath   for the capitulation that ignored the popular will of the landslide victory of the NO in the Referendum on July 5. It is the wave of popular revolt about what rightly is considered as a betrayal of the hopes  invested to Syriza for an end of austerity that led to the collapse of the government.

The splits in Syriza  are not  limited to the forces joining  “Popular Unity”, they are  multiple, and they are all splits from the left. The most important , potentially, is the split of the vast majority of the Youth organization of Syriza from the Party, leading to its end as youth organization,  with only a small part  moving towards the “Popular Unity”, and other sectors  looking towards  the revolutionary left.

The split of Syriza was followed by a split of Antarsya, the coalition of organizations in the extra parliamentary left, with a sizable  minority joining  “Popular Unity”. The majority of Antarsya rejected what it was considered as an ultimatum in negotiations  with the Lafazanis new party , which refused to form a front between the two organizations, asking  for a dissolution of Antarsya in “Popular Unity” and  a full acceptance of the  program of the latter. This program is  a replica of the Syriza 2012 program, including the refusal of any break with the European Union and the bankrupt capitalist system. There are very few differences from the so-called 'Thessaloniki program”: an emphasis to the “possibility for a return to the national currency, the drachma”, a call for workers control  and some other, more or less minor changes, mainly rhetorical, to give it a more “leftist” outlook. The main call of the  national-reformist Popular Unity, including in its electoral campaign, is to rebuild a “consistent Syriza of its origins”  to form  an “anti-Memorandum, patriotic, democratic front”, without any class reference  and /or anti-capitalist  content.

Although the polls cannot be trusted, they give  to “Popular Unity” only a   meager 3-4.5 per cent  in the coming elections, and some of them raising the possibility even that  Popular Unity will not enter into |parliament. Perhaps  these figures distort reality,as nobody  forgets that the polls failed  totally to predict the triumph of the NO in the recent Referendum. But it is true that “Popular Unity” had an ill start, repelling many forces that  initially had turned to it  by reproducing the bureaucratic, authoritarian, reformist, electoralist,and programmatic features of Syriza, replacing only in the place of Tsipras, Lafazanis. A Euro-skeptic ( but not rejecting the EU itself)  national reformism does not look and it is not an alternative to a pro-EU reformism that has already capitulated and discredited. So Syriza loses undoubtedly forces, militants, voters  in a non stop hemorrhage but, until now,  it is not neither the Right, nor the fascist far right nor the  Popular Unity that wins them.

The peculiarity of this  short pre-electoral period is that all the competing parliamentary parties are  discredited  by introducing ,either in the past  five years  or now, the austerity measures  of social  cannibalism. The  electoral competition between the two biggest parties, the right wing “New Democracy” and Syriza,are around the choice of “the best manager of the 3rd Memorandum”. Syriza promises  a “more humane” management of the “List of Horrors”, as  Der Spiegel has called the 3rd Memorandum, while the Right a more “responsible” one.

In any case , no party  could  win on September 20 an absolute  majority, and already  everybody  speaks about  a “new national unity” government, a ruling coalition either   having as dominant core Syriza or New Democracy, or both, in a “Grand Coalition”. Its (impossible) mission:   to impose the “List of Horrors”on a devastated, pauperized  but still undefeated  people,  with a surging, combative young generation of  unemployed  workers, a youth without future,  in the forefront of all social struggles.

Greece has been transformed into a peculiar EU protectorate, where all the main economic, social, and political decisions will not be taken by any  government elected in the next elections but by the imperialist  “institutions” of the EU, the ECB, the IMF, and now the ESM (the troika has been transformed into a “quartet”)regularly supervising the implementation of the Memorandum and imposing financial discipline.

The elections  will only  exacerbate  a  deep capitalist regime crisis. Whatever the result, class war will intensify within the conditions of a new phase of the world capitalist crisis, as a new tsunami came already  this summer from China, with huge  impact in a stagnating, over-indebted EU economy, and its broken link, Greece.

The old political system has collapsed  already in 2012. The attempts  for its restoration by the Right, exploiting the failure of Syriza as alternative, is undermined by the insoluble  economic bankruptcy and the political de-legitimation of  the bourgeois  political system established after the end of the military dictatorship in 1974. Everything is changing rapidly, fluid, particularly in the Left.

To prepare the coming battles, the EEK considers necessary, now more than ever before, to fight for a United Class Front based on a transitional program in the struggle for workers power.  Unity of action is  urgently needed as well as  the largest, open discussion in front of the people  among all the left organization, parties,  collectives  of the workers and popular movements, to draw the lessons of the last 5 years and  to open a new road , after the failure of  Syriza, towards  workers power and a socialist unification of Europe, on the ruins of the imperialist EU, the prison of the peoples and the cemetery of the migrants, its victims.

A re-groupment of the forces of the revolutionary left, first of all, is necessary and urgent. For this reason the EEK, while keeping its political independence,  has formed an electoral bloc with  the majority of Antarsya on the basis of a transitional program  against all austerity measures, for a break from the EU, the IMF, and NATO, for the abolition of the debt, nationalization of the banks and of the strategic sectors of the economy  under workers control,  against racism and fascism, for fraternal unity with the migrants, for a break from  capitalism, its State and governments, to open the road for workers  power and an internationalist perspective for Europe and the world on a communist direction.